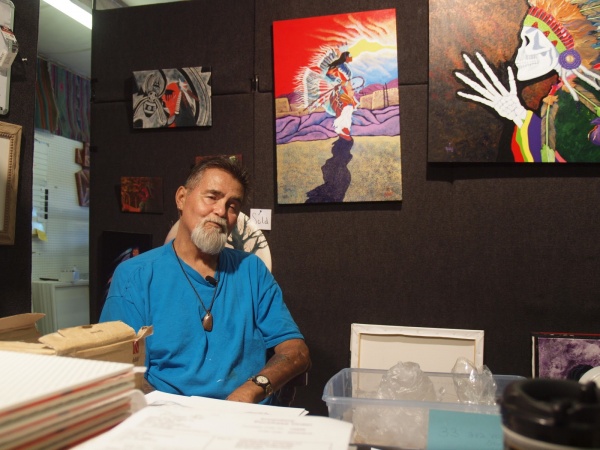 Bill Rabbit was an Oklahoma Native artist who experimented with various styles, painting as he felt rather than according to public expectations. Rabbit exhibited his art in numerous locations and won many awards over the period of his artistic career. In 1986, he was designated Master Artist by the Five Civilized Tribes Museum. Toward the end of his life, Rabbit began collaborating on paintings with his daughter Traci, in their mutual studio located in Pryor, OK. On April 9, 2012, Rabbit died.[1]

Bill Rabbit was born in Casper, Wyoming on December 3, 1946 to parents Swimmer Dave Rabbit and Doris M.E.H Rabbit. He attended school in Casper, where he was the only Cherokee student in the school system. His talent showed early on in his kindergarten class. Rabbit sold his first watercolor in the fourth grade for $4, exhibiting his business savvy. Rabbit has no formal training in art apart from a two-week class in grade school.[2] After high school, Rabbit was accepted to the Institute of American Indian Art in Santa Fe, New Mexico but enlisted in the army instead to serve in Vietnam.[3] Following the war, Rabbit moved to his father's homestead allotment in Mazie, Oklahoma. In Maize, he made Southwestern jewelry with his welding skills. Later, Rabbit took up painting full time and he and his wife began to travel to booth shows and galleries across the country.[4]

Rabbit began painting as he felt rather than in a more traditional style according to what the public wanted. He was part of a wave of artists that broke from the older generation of native artists. Over time, Rabbit's subject matter has evolved from the realistic to the ethereal.[5]

Rabbit's work is widely known and was exhibited in numerous locations, including:[5]

Bill's work is also featured in numerous public and private galleries. Some of his greatest achievements include:

The Bill Rabbit Legacy Art Scholarship was created in Rabbit's honor by the Cherokee Nation Foundation.[6]

The Art of Family

For Cherokee artist Bill Rabbit, finding inspiration was as easy as a childhood romp. As a youngster growing up in Wyoming, he saw the shapes of animals and people in the clouds over the sagebrush prairie and he reveled in the colors of the western sunsets. Those colors infuse his paintings with a vibrancy that borders on psychedelia-see the skeleton on the wall behind him. He told me, "I’ve never seen a rainbow I didn’t like. So think of the flowers, the trees, just the world full of color. I tell you, all you have to do is decide what you want to use and how do you want to use it. I guess I’m really in love with color, the brighter the better, and, you know, I’m just so fortunate there are people out there that like what I do."

Fortunate, indeed. Among Cherokee artists, Bill Rabbit is one of the most noted. His work hangs on the walls of collectors and in private galleries all over the world, and in tribal galleries and buildings throughout the Cherokee Nation.

One of his greatest works of art, though, may be flesh and blood; his daughter, Traci. From their studio in Pryor, Oklahoma, Bill and Traci Rabbit are practicing the business and creativity of art and basking in the love of family tradition.

While Bill Rabbit's inspiration came easily and almost as an afterthought, Traci Rabbit's own muse was somewhat harder to find. Her father encouraged her when she was a small child by giving her brushes and canvas but her style took time and courage to emerge from her father's broad shadow.

She says, "When I first started painting, inspiration was difficult to come. I had probably in-the-shadow syndrome; that I couldn’t create enough or couldn’t do it well enough or come up with my own ideas. And then as I finally started coming into my own, I realized that it was okay because I was being taught. I was being taught what my dad knew. And then I kind of let go of that disappointment within myself and just kind of let it start flowing."

What flowed out was a gentle stream of Traci's muted portrayals of contemporary Native American women, as visually soft as her father's paintings are jarring-as subtle as evening shadows are to the shock of the noonday sun.

Traci brings something of her own to the family art, a business degree, and it has become invaluable. There are a billion starving artists in the world who cannot make a living, but art from the Rabbit Gallery is available for almost any price range and it sells. Collectors with a few thousand dollars can have an original to hang on the wall but fans with no great fortune can also take something home for just a few dollars. The art is on prints, tiles, cups, cards, and jewelry. The successful marketing efforts allow the Rabbits the freedom to follow their artistic urges and expand. They have recently become involved in collaborative efforts that are also becoming noticed. It is this development that brings the most joy to Traci. "Yes, it’s funny when I started out, being Bill Rabbit’s daughter, people wanted some of my work, being his collectors. And then as my work grew over the years, I have collectors who only collect my work, not his, and visa-versa. Now, with our collaboration works, we’re kind of finding a new little area of collectors that like the idea that we’re a father-daughter working together."

The key word is "together" in this family enterprise of art and love.