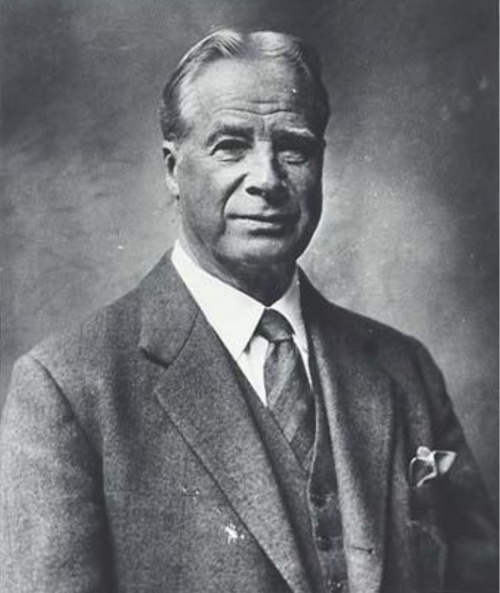 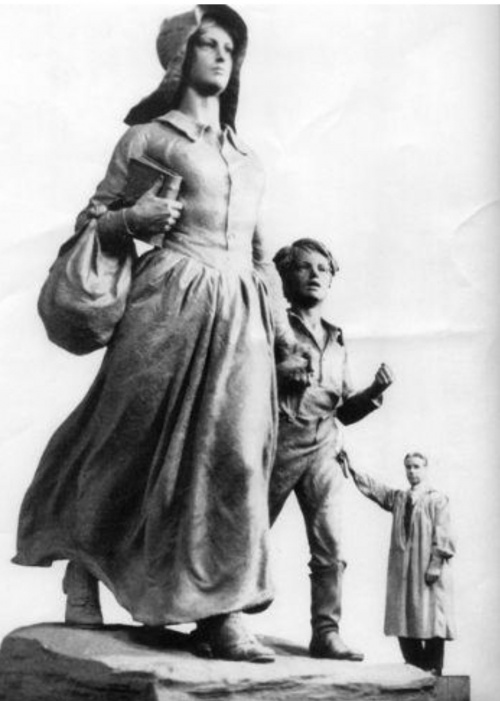 Bryant Baker with the Pioneer Woman. 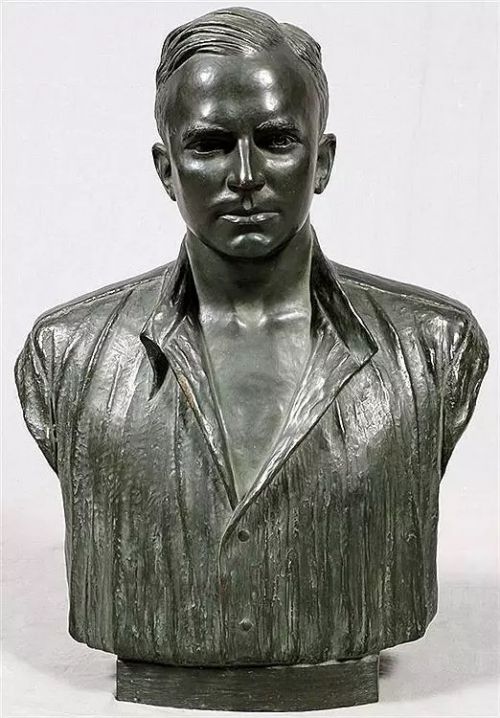 Bryant Baker's Lost Masterpiece. "The bronze of William Madison Wood Jr. is so lifelike that the young man appears to be standing before you," says Hugh Pickens. "This life-size bronze bust, signed by Baker on the reverse side, has never been exhibited in public and has been missing since its creation in 1923. Unknown until 2015, the piece is not even included in the Smithsonian's inventory of Baker's life work."

Bryant Baker studied in London at the City and Guild Technical Institute and the Royal Academy of Arts. His decorative carvings and sculpture were installed at Westminster Abbey and other cathedrals. In 1916 he moved to the United States and served in the army, working to rehabilitate American veterans from World War I by modeling artificial limbs. Baker won commissions for busts of five presidents, including John F. Kennedy. He also made bronze and marble statues of other political figures such as Abraham Lincoln and Henry Cabot Lodge. He was a Fellow of the National Sculpture Society, the Royal Society of British Sculptors, and a life member of St. George’s Society.

Bryant Baker was born in London into a family of sculptors and craftsmen. He studied at the Royal Academy of Arts and created decorative carvings for Westminster Abbey and the Victoria and Albert Museum. While at the academy, he was chosen by King George V and Queen Alexandra to model a statue and bust of King Edward VII. The royal family were so pleased with his work that they requested fourteen replicas of the bust in marble. In 1916 he came to the United States and volunteered in the Medical Corps, making artificial limbs and face masks for injured soldiers. He created sculptures of many presidents, including a seventeen-foot statue of George Washington and busts of William H. Taft, John F. Kennedy, and Calvin Coolidge.

Baker was born on July 8, 1881, in London, United Kingdom, to John Baker, a sculptor. His father and his grandfather were both sculptorss and worked on wood and stone carvings at Westminster Abbey. His brother was Robert P. Baker, also a sculptor of note. He became an apprentice sculptor under his father, and carved Gothic statues for Beverley Minster and decorative elements for the Victoria and Albert Museum. He studied art and sculpting at the City and Guild Technical Institute and later at the Royal Academy of Arts. He graduated from the latter in 1910.

In 1916, Baker emigrated to the United States, where he enlisted in the United States Army. He served during World War I in Army hospitals, crafting artificial limbs and face masks for wounded soldiers. He became a U.S. citizen in 1923.

In 1928, millionaire Oklahoma oilman E. W. Marland sponsored a $100,000 competition to create a statue honoring pioneering women of the American Old West. Baker won the design competition, and in 1930 his 27-foot (8.2 m) high, 12,000 pounds (5,400 kg) statue, Pioneer Woman, was unveiled in Ponca City, Oklahoma. It became his best-known work. In 1957, Baker was elected into the National Academy of Design as an Associate member, and became a full member in 1959.

Baker never married. In his final years, Baker lived in The Gainsborough high-rise apartment building at 222 West 59th Street in New York City. He died of unspecified causes at St. Barnabas Hospital in The Bronx on March 29, 1970. He was cremated, and his ashes interred at St. Peter's Church in Fordcombe, Kent, England.

Shortly after his death, the contents of his New York studio were purchased and moved to the E. W. Marland Mansion in Ponca City. The mansion is now known as the Ponca City Cultural Center, and Baker's studio and copies of many of his works are on display there.

Baker was a Freemason, and belonged to the Constitutional Lodge No. 294 at Beverley, Yorkshire, England.

In 1923, Baker received a haunting request from the Wood family to create a bronze of William Madison Wood Jr who had died months before in a tragic accident in the hopes that the sculpture could help assuage the pain of hisgrief-stricken father. The result of the urgent commission was a one-of-a-kind bronze bust of the dead son that shows the young man in all his vitality.

"The bronze of William Madison Wood Jr. is so lifelike that the young man appears to be standing before you," says Hugh Pickens. "This life-size bronze bust, signed by Baker on the reverse side, has never been exhibited in public and has been missing since its creation in 1923. Unknown until 2015, the piece is not even included in the Smithsonian's inventory of Baker's life work."

"Baker's bronze of William Madison Wood is artistically the equal of any bronze that Baker created in his lifetime and surpasses them all in its emotional impact. The condition of the bronze and the workmanship that went into it is superb," says Joseph Gierek, owner of Gierek Gallery. "Discovered after more than ninety years, this piece is truly Bryant Baker's Lost Masterpiece which has now seen the light of day."