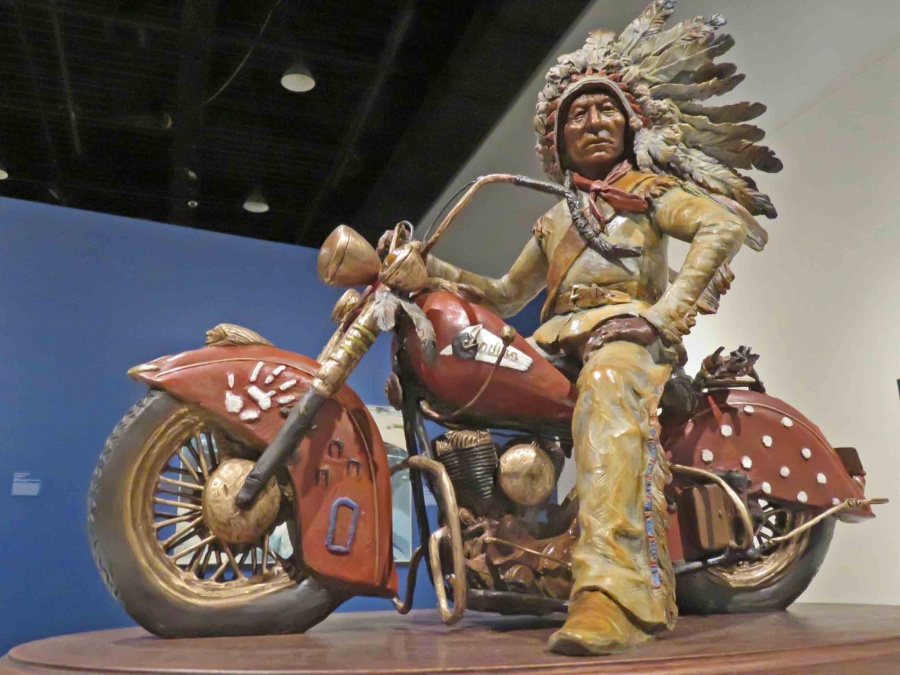 Work by Ed Natiya. “Ed is one of the best sculptors in the West,” says gallery managing partner Keith Huey. “As a fan of Baroque and Renaissance work, he pays a lot of attention to how the human form moves. No one compares.” Adds Natiya, “My aim is to create what I like to call ‘a speaking likeness,’ to pull out of my subjects emotional and spiritual aspects that make a piece come to life.” 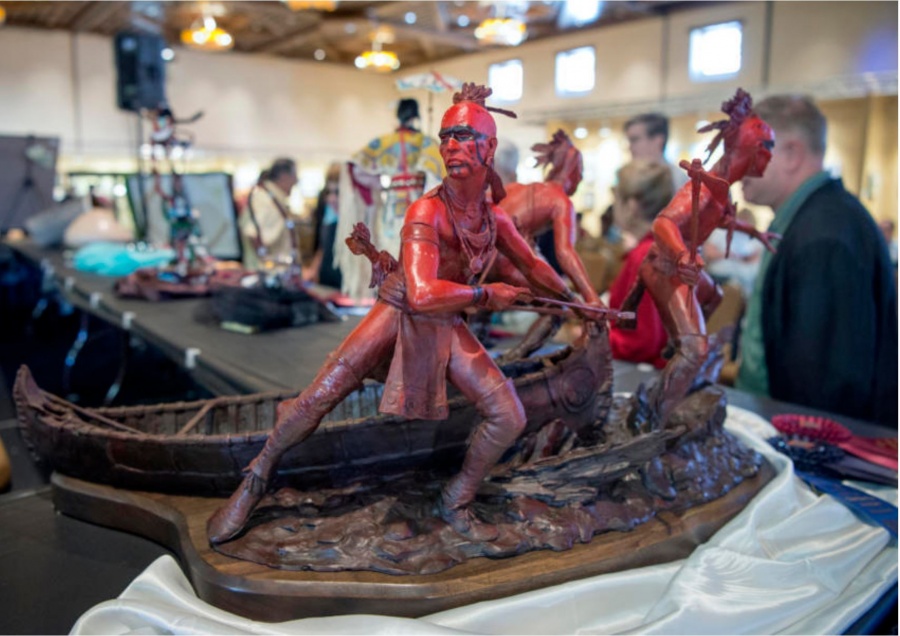 Work by Ed Natiya. Ed Natiya, Navajo, from Albuquerque got the best sculpture award with this piece. 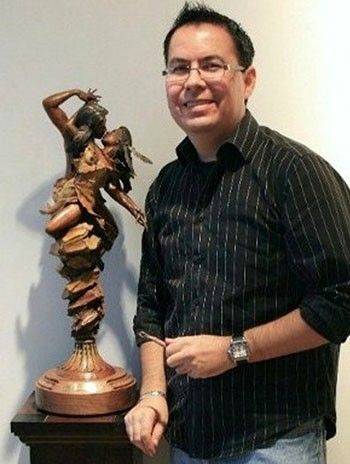 Ed Natiya. Navajo artist and sculptor, Ed Natiya Saxon, comes from a very proud and noble heritage. His Navajo name, Natiya, was given to him at birth and means 'everywhere; all over; at once'.

Art openings are known for lively conversations among those attending, usually centering on which pieces they like and which they’d purchase. But some of the discussions at the August 22 opening reception for Navajo sculptor Ed Natiya’s latest works at Hueys Fine Art in Santa Fe may touch on deeper subjects. Consider, for example, the response to his clay maquette for WAR PONY, the artist’s soon-to-be-cast, limited-edition bronze depiction of Sioux Chief Sitting Bull, portrayed in his full traditional regalia anachronistically astride a classic 1951 Indian-brand motorcycle emblazoned with the battle symbols that Indian warriors usually painted on their steeds.

“People are always asking me what I think about naming football teams”—and other brands, for that matter—“after Native Americans,” says Natiya, who’ll be present at the opening. “I’m not here to judge either side of the discussion. I’m just bringing up this conversation in a unique and whimsical way that also has deeper tones to it and leaving it open to viewers’ interpretation,” he says.

That issue is likely to be debated among viewers of his show, which is timed for the weekend of Santa Fe’s 93rd annual Indian Market. What isn’t in doubt, however, is the serious talent Natiya brings to the approximately 30 sculptures on display, portraying a wide range of mostly noncontroversial subjects. These include wildlife, some whimsical pieces, and historical figures like the recently completed QUANAH, a powerfully serious-looking bust of the Comanche Chief Quanah Parker.

“Ed is one of the best sculptors in the West,” says gallery managing partner Keith Huey. “As a fan of Baroque and Renaissance work, he pays a lot of attention to how the human form moves. No one compares.” Adds Natiya, “My aim is to create what I like to call ‘a speaking likeness,’ to pull out of my subjects emotional and spiritual aspects that make a piece come to life.”

Not surprisingly, the sculptor has been a strong and steady seller in the decade or so he has shown with Hueys, which spotlights his works every year at this time—as well as providing him with a studio space within the gallery, where visitors can watch Natiya at work every Friday, Saturday, and Monday. “Ed sells between 150 and 200 pieces of sculpture a year,” says Huey, “and half of those are sold just in August during Indian Market. That’s a lot of sculptures, and they go all over the world, including London, Dubai, Egypt, Canada, Germany, Italy, Australia, and all over the U.S.”

Visitors to the show at Hueys this month likely get first dibs on Natiya’s five latest sculptures, still in clay form and yet to be cast into bronze editions that range from just 25 to 50 pieces—an advantage that, for serious art collectors, is definitely not open to debate.  —Norman Kolpas

Natiya said his metal sculpture of the Iroquois, who he said used some of the stealth techniques that special forces units still use today, is historically accurate.

“Part of the fun is doing all the research into how they would dress, what accouterments or weapons they would use, and to study those things in depth,” Natiya said.

Natiya spent about a year working on the sculpture, and although he’ll likely sell it by the end of the weekend, he said he’ll never forget the red men he spent so much time working on.

“It really is one of your children,” he said. “There are some pieces that have a special place in your heart, and this piece definitely has a special place.”

Best in Class winners at the 2016 Santa Fe Indian Market are:

His Navajo name, Natiya, was given to him at birth and means 'everywhere; all over; at once'.

A family name, it was passed down to him from his late grandfather, Harding Natiya Negale, who served as a Navajo Code Talker during WWII.

Ed Natiya's grandmother, Glenna Negale, was a medicine woman and a distinguished and honoredNavajo rug weaver.

His great grandfather, Manuelito Begay, was a well known medicine man and a tribal counselor for the Crown Point area in northwest New Mexico.

Natiya's great-great grandfather, Bullet Manuelito, was one of the last four chiefs of the Navajo before Kit Carson gathered his people for the historic 'Long Walk' to Fort Sumner, New Mexico.

Now, following in the footsteps of his rich and diverse legacy, Ed Natiya is fast becoming one of this countries leading Native American artists.

Described as a 'virtuoso' in painting, drawing and especially sculpture, Natiya has received numerous awards for his artwork not only in New Mexico, but also throughout the greater United States.

Born in 1972, Natiya's prodigiuos talent for art was recognized early on in his life.

From the time he was a small child, his mother, Mary 'Ah-so-bah' Saxon, who herself is an accomplished Navajo potter, taught Natiya the fine art craft of making and designing traditional southwest pottery and figurines.

It was through the use of these bask earthen materials that Natiya's love for art and sculpture first became manifest.

Throughout his schooling, teachers and administrators quickly recognized his inborn artistic talent and abilities.

They continued to help him develop his skills and even encouraged him to enter a few art competitions.

After winning several awards and with his confidence built, Natiya decided to continue his study of art and art history at the University of New Mexico wherein he received his 'Bachelor's Degree in Fine Art'.

However, as many artists can tell you, the road to success is not an easy one.

In order to support his growing family, Natiya worked for many years as manager of a local art supply store.

While at night, Natiya continued to hone his talent and skills to produce wonderful works of art.

Never having given up on his dream, his perseverance has been well rewarded.

Natiya's work has shown in and continues to show in numerous galleries, museums and universities throughout the United States.

He currently sculpts full-time and now lives in Albuquerque, New Mexico with his two adorable little girls, Ivory and Avonlee.Natiya's strong Navajo roots have kept him grounded as well as inspired within creation.

Natiya feels there is still much to be told about the wisdom of long ago and the genuine nature of native peoples.

Their wisdom and integrity, gratitude for life and their deep connection with nature are only a few of the teachings Natiya learned to value at a very young age.

These simple yet powerful truths communicate through his artwork and continue to this day to speak to the hearts of viewers young and old.

Through his divine use of clay and bronze casting, Ed Natiya is somehow able to capture the true essence of his people from a very genuine perspective.

He sculpts their stories and native wisdom as it once was, in hopes that these teachings and values may be remembered and appreciated for years to come.