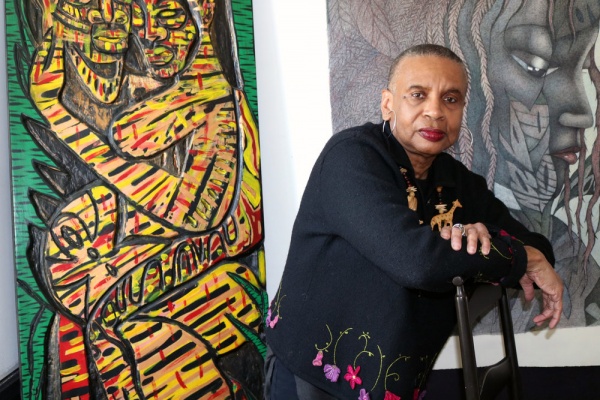 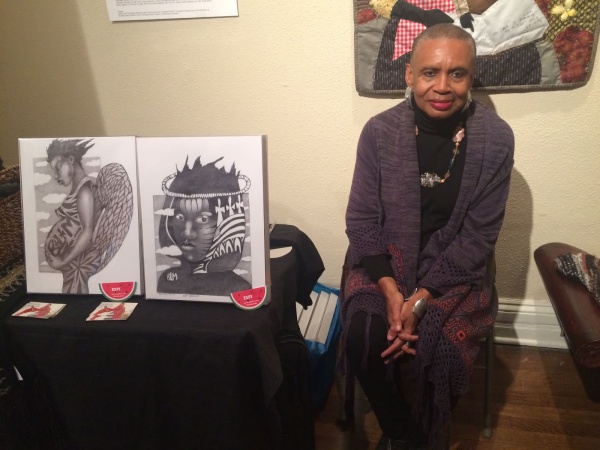 A native of Chicago, Frazier completed a BFA at the School of the Art Institute of Chicago and a MFA at the Maryland Institute of College of Art. She has resided in Baltimore for the past twenty years. In addition to her art she has developed a "wood graphics” process over 25 years ago that uses colored inks on relief wood carvings. She also works with mixed media (mosaic tiles, glass, beads and copper nails) in her work. Frazier attributes artist Charles White as a strong inspiration of her work. "His understanding of light, shadow, and depth of emotion was powerful and showed me the importance of mastering the ability to draw well all the time," says Frazier.

Inspired by African, Caribbean, Egyptian, and Japanese Art, Frazier’s creative themes include both the female as goddess/life/giver and the integral beauty of African people. Frazier’s media is mainly illustration and some wood carving. Her work speaks to the universal quest to understand who people are beyond race, age, and gender.

As a young art student, Espi Frazier belonged to a group of mixed media artists and performers dedicated to changing audience perceptions of African Americans.

In her upcoming solo show at the Hamilton Gallery during November, Frazier, now 60, strives to do the same for women — one of her favorite subjects.

The 18 black and white illustrations that make up “The Many Faces of Beauty” depict the faces of a variety of women of various ethnic backgrounds. “True beauty is not limited by race, age, gender,” Frazier said.

Frazier focuses on faces because she believes one’s face truly shows a person’s being and state of mind, and that the eyes reflect what is in the soul.

Frazier has been enchanted with drawing since she first picked up a pencil at the age of 5. The Chicago native, who was raised in a foster home, credits her talented foster mother with setting a creative example by showing young Espi how to cook, design clothes, crochet and much more.

“I watched what she did and I learned,” said the Loch Raven resident.

Frazier completed a BFA at the School of the Art Institute of Chicago and an MFA at the Maryland Institute College of Art. For many years, she has taught art at Friends Middle School in Baltimore.

“Espi Frazier’s creative flare, her cool demeanor, and her demanding approach in her classes brings out the artist in all of her students,” said Friends Middle School principal Scott Harrington. “They love it, and they love Espi.”

She originally focused on fashion illustration, but in addition to her drawings and illustrations, she has developed her own “wood graphics” process that uses colored inks on relief wood carvings. She also works with mixed media, including mosaic tiles, glass, beads and copper nails.

Her favorite Egyptian symbol, the Ankh — representing life — shows up in much of her work.

Though Frazier is well-known for her life-sized carvings, she said that drawing is her favorite medium. She uses a pencil to help her define layers, and pen and ink to explore design and pattern, which helps create her visual language.

Frazier also enjoys drawing in black and white as she feels it is equal to and sometimes more compelling than color.

Frazier credits African American and social realist artist Charles White as a strong inspiration for her work. “His understanding of light, shadow and depth of emotion was powerful, and showed me the importance of mastering the ability to draw well all the time,” said Frazier.

Though Frazier’s professional life as an artist has been multifaceted, she always returns to her first love — drawing. She said her drawings for the upcoming show were all done since this past summer, when Frazier would just sit back and watch a movie, with a pen or pencil “twirling around” in her hand.

Frazier so enjoyed the experience of creating these drawings that she thinks she may continue the series. “I love the feeling of a pencil in my hand,” she said.

A Gallery of Inspiration

Espi Frazier exudes energy and warmth—you see it when she flashes her easy smile, or when she runs her fingertips lightly across the intricate crevices in one of her own wood artworks, which are uniquely stained and engraved. A career artist, Maryland Institute College of Art (MICA) alum, and 24-year instructor at Friends School of Baltimore, Frazier’s work centers around the female form, celebrating it as goddess and life-giver.

By surrounding herself with sources of inspiration—whether it’s a detailed beaded flag made in Haiti depicting La Sirene, a mermaid Voodoo god, or a children’s book like The Wonderful Wizard of Oz by pop-up artist Robert Sabuda (“Just look at that detail, it’s amazing,” she says with the turn of each page)—the artist has turned her home into a constant muse.

A three-bedroom brick rowhouse with a bucolic backyard on a tree-lined street in Loch Raven, Frazier’s home also functions as a studio and gallery. The walls are hung with artwork from floor to ceiling—both her own pieces and those she has collected since earning her master’s of fine arts from MICA’s LeRoy E. Hoffberger School of Painting in 1995 under then-director and late legendary painter Grace Hartigan.

Grew Up: South Side, Chicago, Illinois

You Might Not Know: Originally, Frazier wanted to design clothes. “I thought I was going to be a fashion designer when I first went to the School of the Art Institute of Chicago. I took a fashion class and learned how to sew and all that,” she recalls. “I thought, ‘I don’t like this, I just want to draw the stuff.’” She did, however, go on to instruct a course in fashion illustration for high school students at School of the Art Institute of Chicago (SAIC).

Breakthrough Method: Frazier patented a technique of carving, staining, and drawing on wood, which she describes as “wood graphics.” It was spawned by a simple undergrad assignment at SAIC. “The teacher gave an assignment to draw on something other than paper,” she recalls. “So I found a piece of wood under my mom’s house.” On it, Frazier drew a woman’s figure surrounded by a woodgrain-like pattern. The original work remains on display in her home.

A Community of Artists: When Frazier moved to Baltimore in 1993, she attended social gatherings hosted by Dr. Leslie King Hammond, then MICA’s dean of graduate studies. There she was introduced to prominent Baltimore artists including mixed-media sculptor Joyce Scott, the late Tom Miller, known for his “Afro-Deco” painted furniture, mixed-media artist Oletha Devane, and public artist Linda DePalma.