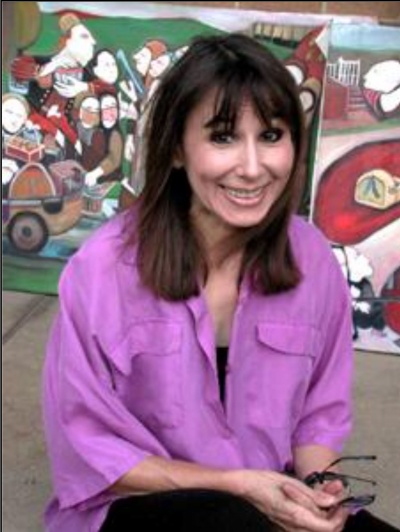 Isaac Shari named herself after her son

Not too many years ago, Shari gave birth to a child, Isaac, who died after living for less than one day. Because he did not live long enough to have his own voice, Shari took his name and her own first name to establish her art signature. Isaac has legally changed her name and answers to both Isaac and Shari.

Isaac began taking drawing lessons twice a week at the age of nine from Mae Hogan, "a very Bohemian woman." As an adult, Shari audited art classes at U.S.A. and on the Eastern Shore but soon decided that formal training would not benefit her. Specifically, she realized this in a class one day when she grabbed the arm of the instructor (who had a brush in his hand) as he reached toward the painting before her. "You can't touch the canvas." Her words surprised her and made her feel territorial. Though she has had scant formal art training, Isaac states that she has had the opportunity to study with instructors whose real-life experience was more beneficial to her than their academic counterparts.

Shari formerly worked with an interior decorator, producing floor cloths, painted furniture, house paintings, folk art pieces, and still lifes for commission. The pieces were "made to order," but allowed her to paint when her own work was not selling. Though proud of what she produced, it was not "her work" and did not bear her name.

Isaac works a canvas for six months. She usually starts with a sketch and then transfers what she likes in the drawing to paint on canvas. Working on a new painting is very intimate: "There's an intense emotional relationship between the artist and the canvas." Isaac explains that there is a "back-and-forth conversation" with the piece, a spontaneous interplay where she paints and then something in the piece responds, requiring her to attempt again to paint the piece. After the "love affair" is over, Shari puts the canvas aside for a while and works on other paintings, returning to the piece later to add details.

Isaac thinks of her paintings as transcending her, "like a child leaving a bad parent." She names each piece by using a description of a character in the painting.

Shari, for the most part, will not talk about her work or what the paintings mean. Experience has shown her that her own comments detract from the thoughts of the viewer. Isaac does enjoy, however, hearing what is said about her work, finding that the viewer sees more than she does; Shari believes that she learns a lot about the viewer by what he or she brings to the interpretation. Thinking of herself as a visual poet, Isaac can acknowledge the legitimacy of the view without confirming it.

Isaac did say, though, that her work generally has a woman in the center of each painting and that that part is autobiographical. She acknowledges common elements in her paintings: boats, flight, and animal-like people. Shari further conceded that her work suggests gender structures (male vs. female) and religious themes.

Allow me for a moment, dear reader, to step out of the third-person omniscient narrator role long enough to express my own untrained opinion. The paintings I have seen provide a most interesting cast of characters. The people who populate the canvas appear displaced, as though they live uncertain lives in an unknowing world. Nevertheless, there is some sense of comfort in the multitude's shared surroundings. Though the subjects appear lonely, they are not alone. But, I digress (and Shari neither confirms nor disavows the observations just made).

Isaac states that she appreciates all artwork but did not know of any particular artist or style that influenced her. She likes the Impressionists, Braque and the development of Cubism, and the Flemish because of their technique. She likes the balanced color palette of Bosch as opposed to the more modern, lighter palettes. Shari further stated that although she feels compelled to paint, she is "not in pursuit of something religious or philosophical like most artists are" when she begins working on a piece. "The world is very large and a single painting can't say much about it."

Locally, Isaac's work can be seen at Gallery 54 exclusively (though she formerly has had pieces at Koch Gallery). Shari states that the proprietor, Leila Hollowell, works the artists without directing their work. Shari also shows her art at Blue Spiral Gallery in Asheville, North Carolina; she was lucky to have the hard-to-get- into gallery take on her work as an experiment where she promptly sold two pieces. Isaac would like to do shows but has been unable to amass enough work at one time to do them.

Isaac tries not to compromise her work, remembering advice given her by a dear friend to not forget who she was. It is readily apparent to this viewer that she has remained true to her friend and her own vision. Likewise, this reviewer is unlikely to forget the images Isaac Shari shares on canvas.

Shari: "These are my former works, and I am going to take you through a slide show."

With her straight, long black hair and dark eye makeup, Shari looks and sounds as if she was sent to the salon from Central Casting.

Shari: "This is my general style: They call it figurative and surrealistic."

The artist shows slides of her rather sexually explicit work, which was actually quite good. But after about 15 minutes of art talk, most the guests just seem restless or, like Patricia, exhausted.

The questions peter out and the guests start conversations among themselves. Pascal, another English teacher, confides she was just hoping for a repeat of the best night she ever had here: When Yves, a Parisian acoustic guitar player, sat down, not to play the tunes of Charles Aznavour, but those of Crosby, Stills and Nash -- and the greatest fun of all at this Paris Salon.