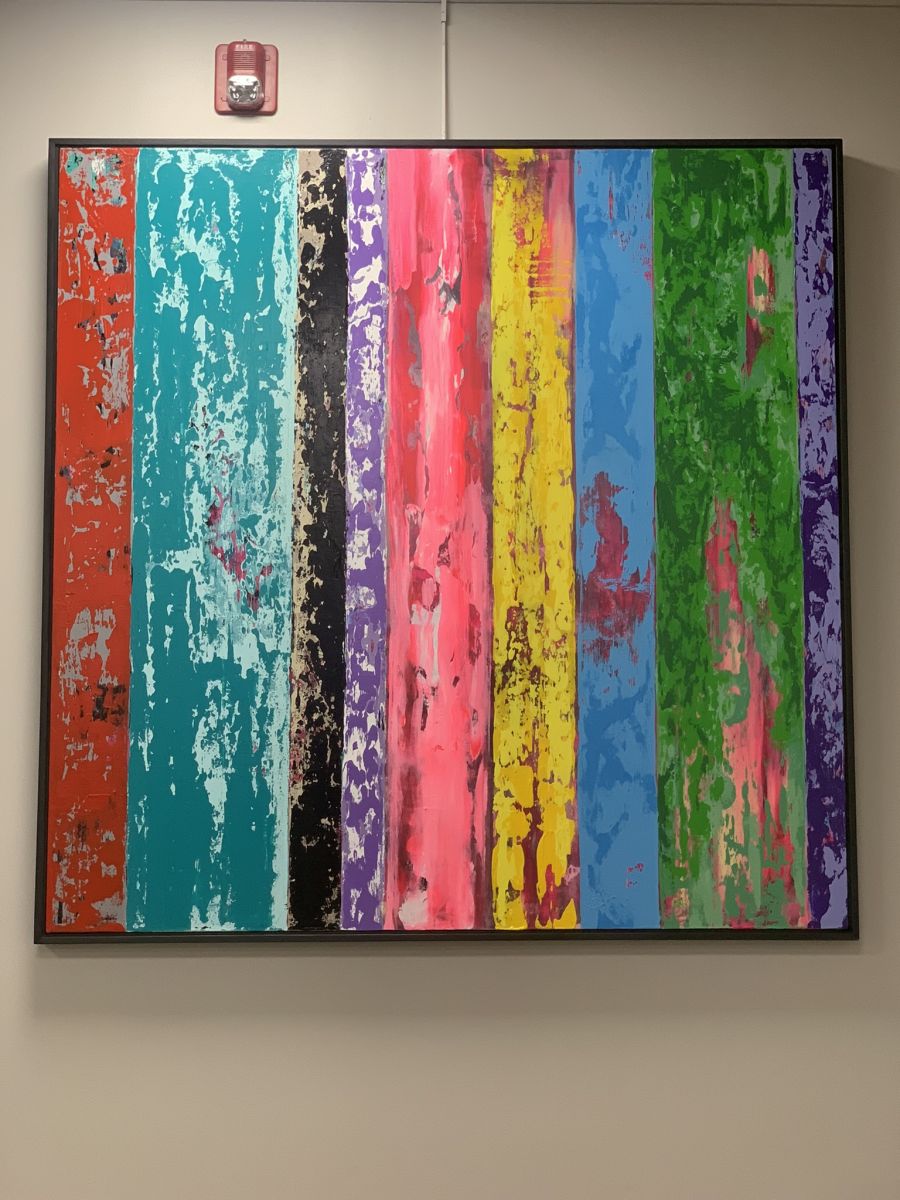 "Noodlin' is a Colorful but Dangerous Way to Fish" by Jay Exon.

Jay Exon is an American painter specializing in abstract art. He began flourishing a brush painting scenery for the theater during his apprenticeship with noted set designer Richard Ellis. In 2015, Jay began painting full-time and soon developed a career as an independent artist. Though his abstract style is a departure from that of his formal training, he brings to each work a sense of theatricality.

"My paintings are serendipitous discoveries revealed through open-minded experimentation. I paint as if treasure hunting, inspired by possibilities in pursuit of the novel. There are no accidents on my canvases, only coincidences. Perhaps Robert Motherwell of the New York School put it best: "In the brush doing what it is doing, it will stumble upon what one couldn't do by oneself.”"

Having started his career as a full-time artist in 2015, Jay Exon seems to have found his sweet spot many artists struggle with- focusing on his art full time while someone else markets and sells it. “I think as an artist; you’re painting for you. You’re not painting for what sells because you can get into a trap of not evolving and just producing the same painting over and over again,” explains Jay.

historic Route 66, which is an excellent opportunity for Jay to sell his work and an honor for him to be in such a revered gallery. “Just having my art on the walls next to other art that blows me away is such an honor.” recounts Jay.

Many artists know how difficult it is to be creative and manage their business; that is why Jay feels being represented by a gallery of this caliber allows him to focus on his painting full time and not worry about marketing and sales.

For 39 years, Joseph Gierek Fine Art Gallery has been a destination gallery frequented by repeat customers and visitors traveling to Tulsa, admiring the extensive collection of paintings, sculptures, glass, collage, and mixed media works. “The gallery is well established, and Joseph has a great reputation for carrying the best names from the East Coast to the West Coast as well as many local Oklahoma artists.”

Growing up in Tulsa, Jay started painting for theatrical stage sets at the American Theater Company. Having learned technical skills in art design, woodworking, and color theory prepared him perfectly for his career as the full-time abstract painter that he is today. Tulsa has innumerable opportunities for artists to get their names out there, and for Jay, having his art on the walls at the Designer Showcase and Parade of Homes is where people started to respond to his work. Jay had a couple purchase seven paintings for their home from these showcases, and when it comes to buying multiple paintings from one artist, he says, “it’s about relationships and finding people who like your work. Buyers need to find something they want to look at every day.”

Jay advises that when you purchase just one painting from an artist, you become a collector and that “collectors must understand that an artist is going to evolve and change so that they won’t get stuck in one style. It’s neat to be involved in the artists’ journey as they create.”

Jay is a fan of bold colors – pink being his favorite. When standing in front of his large pieces, you are immediately drawn to the vibrancy and power of his chosen colors. His colors reflect his mood and inform the naming of the work, which he does with his sister. “The names all have an inside story. I try to keep them interesting and comical.”

Another benefit for an artist to be exclusive to a gallery is the anticipation from new and long-time collectors. Collectors – and friends – are always looking for what’s coming next from the artist. Asking, what is the next piece or series you will paint? Being represented at one gallery gives people a consistent place to revisit and follow the artist’s evolution. And for the artist, the gallery is a container for that evolution because sometimes a painting happens in an afternoon, and sometimes it takes a year. For Jay, being represented at the Joseph Gierek Fine Art Gallery is an opportunity to feel supported so he can focus on his art. “I think for many artists, you can have doubts, but when you have that cheerleader who reinforces that you’re doing good work, it is so meaningful. It’s great if it sells, but just receiving that feedback about your art and value is just as important.”