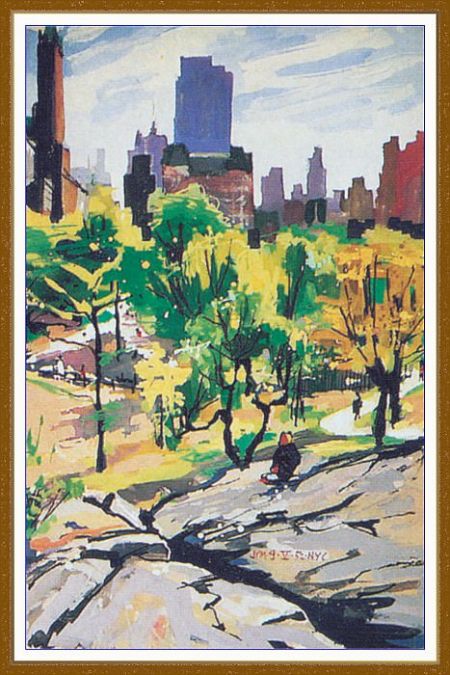 John Manship was son of the sculptor Paul Manship, creator of the Prometheus statue at Rockefeller Center. This work was created while the artist was studying abroad in Milan, Italy. Manship first went to Europe for three years of study in 1949, financed by a bequest from Grace Rainey Rogers, his godmother. In 1955 Manship returned to Italy for a ten-year period where he studied at the Scuola Brera in Milan. During these early years in Europe, Manship painted landscapes in oil and gouache in the style of Baroque painters such as Bernardo Cavallino (1616-1654/6) and Diego Rodriguez de Silva y Velasquez (1599-1660) which he exhibited in both Italy and Germany. This early work exhibits John’s signature style of working watercolor and gouache over an ink under drawing.

John Paul Manship, an American artist who was the son of the sculptor Paul Manship (1885-1966), died on Friday in Gloucester, Mass. He was 73.

The cause was cancer, his family said.

Named for the painter John Singer Sargent, his father's friend, Mr. Manship was born in New York City. While a student at Harvard, he converted to Roman Catholicism, and many of his paintings and sculptures were based on religious themes.

A bequest from his godmother, Grace Rainey Rogers, made it possible for him to live for several years in Italy, where he met his future wife, Margaret Cassidy, a sculptor, who survives him. He is also survived by two sisters, Sarah Janet Murtha of Braintree, Mass., and Elizabeth Robinson Solomon of Sacramento.

In a 50-year career, he had many one-man shows in the United States and Europe. Last summer the North Shore Arts Association in Gloucester organized a retrospective exhibition of his work, accompanied by works by his wife and father.

Mr. Manship was a leading authority on his father's career. He published a biography, Paul Manship, in 1989, and frequently lectured on and authenticated his father's work. As executor of the Paul Manship estate, he placed more than a thousand sculptures and drawings with the Smithsonian American Art Museum in Washington.