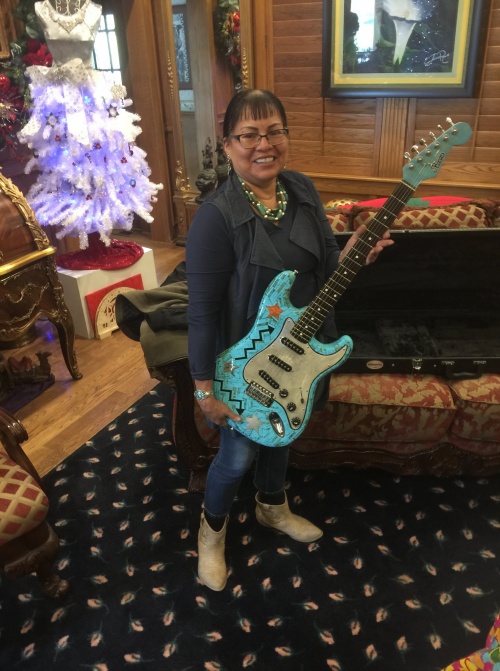 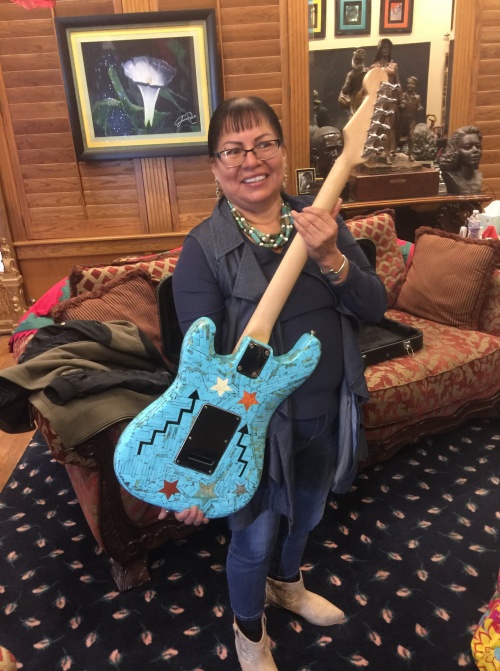 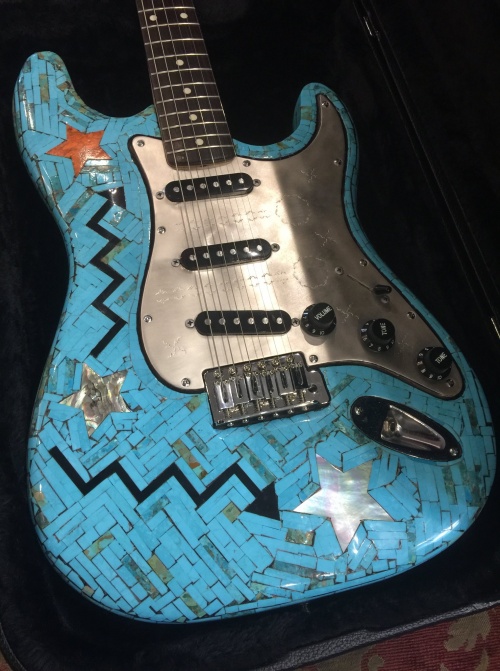 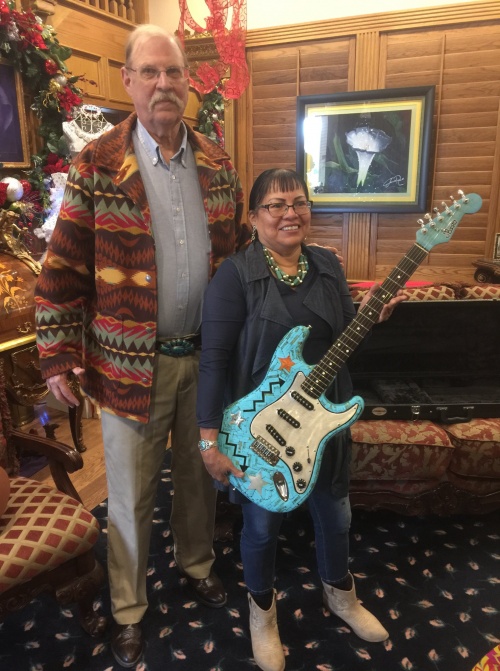 Jolene Bird and her son Charles drove 12 hours from Santo Domingo, New Mexico to visit me yesterday and today and show me the piece of tuquoise inlay work that she has been working on for the past two-and-a-half years. This is a Fender Stratocaster guitar onto which Jolene has attached pieces of Kingman and Sonoran Turquoise highlighted with Jet. The stars are in Abalone, Mother of Pearl, Pipestone, Yellow Serpentine, and Spiny Oyster. The artistry in this piece is simply breathtaking and has to be seen to be believed.

For an artist, a masterpiece is considered the greatest work of a person's career or a work of outstanding creativity, skill, profundity, or workmanship.This is Jolene Bird's Masterpiece, the culmination of thirty years of honing her talent in working with inlaid turquoise. Jolene says that she will never create another piece this complex and beautiful. The reverse side is as beautiful and intricate as the front.

Dr. Pickens never saw this creation, but she did know that Jolene was working on it. The last time Jolene visited with my wife she told my wife that she was working on the guitar and my wife told her she wanted to see it and purchase it when it was finished. Dr. Pickens already had dozens of Jolene's other pieces in her collection and was very familiar with her work. I have no doubt that if this piece were at Santa Fe Indian Market, it would have taken first prize. It will have a place of honor in Dr. Pickens Museum.

I was talking to Jolene about an artist and immortality. Isabella Russell-Ides says in her play "Lydie Marland in the Afterlife" that you don't really die until your name is spoken for the last time and you are remembered by someone that knew you or knew of you for the last time. I told Jolene that 100 years from now, people will be looking at this masterpiece with her name on it in Dr. Pickens Museum and that her great-great-grandchildren will come and say that one of their ancestors created this work of art. That is immortality for an artist. Thank you Jolene for creating this work of art.

Jolene Bird is an accomplished artist who learned her craft from her grandfather over 20 years ago. Jolene makes her jewelry in the tradition of the Santo Domingo Pueblo in New Mexico. After studying at the prestigious Poeh Institute in Santa Fe, Jolene has continued to refine her craft by selecting only the finest raw materials and then cutting, carving and shaping each separate element to create her highly refined jewelry. Working with natural materials, Jolene makes her own beads from stone and shells, sizing each piece as she makes her jewelry. She is particularly accomplished in inlaid mosaic pieces. Finishing many of her works with hundreds of heishi beads, Jolene cuts every bead – each a different size and dimension, while at the same time relating to the adjacent beads – resulting in some of the finest traditionally designed necklaces and bracelets found in contemporary Native American jewelry.

Jolene is a regular participant in a number of shows throughout the United States each year. She won 1st Place in the Traditional Category at the prestigious 2012 Red Earth Festival in Oklahoma City, an event sponsored by the Oklahoma City Art Museum. She took 2nd Place at the Eiteljorg Museum in Indianapolis, IN (2012) and will be showing her work at the Santa Fe Indian Market. A regular guest participant in a number of national and international shows, Jolene has presented her jewelry at:

A member of the Santo Domingo Pueblo tribe, Jolene Bird has been designing and crafting jewelry in semi-precious stones and sterling silver for over twenty years. Her unique inlay work in the traditional style was honed at an early age from her grandfather who taught her how to select the highest quality stones and shape them into intricate designs. She studied the art of silversmithing at Po Arts in Pojoaque Pueblo and grew into her own exclusive designs that are now recognized by discriminating collectors worldwide. Jolene’s distinctive style was acknowledged in the 2011-2012 edition of A Cup of Cappuccino for Entrepreneurs Spirit: American Indian Entrepreneurs. Her exceptional contemporary jewelry continues to earn top awards at prestigious juried art shows.