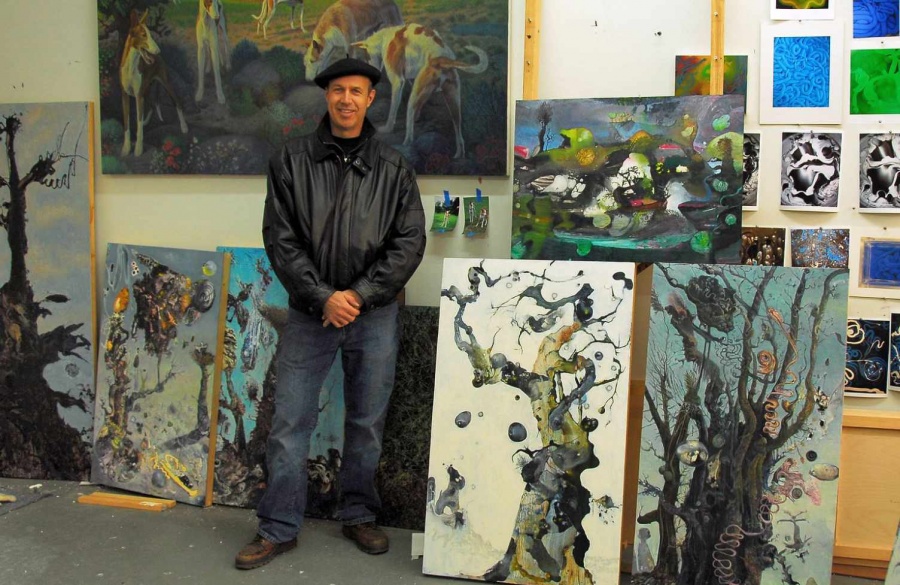 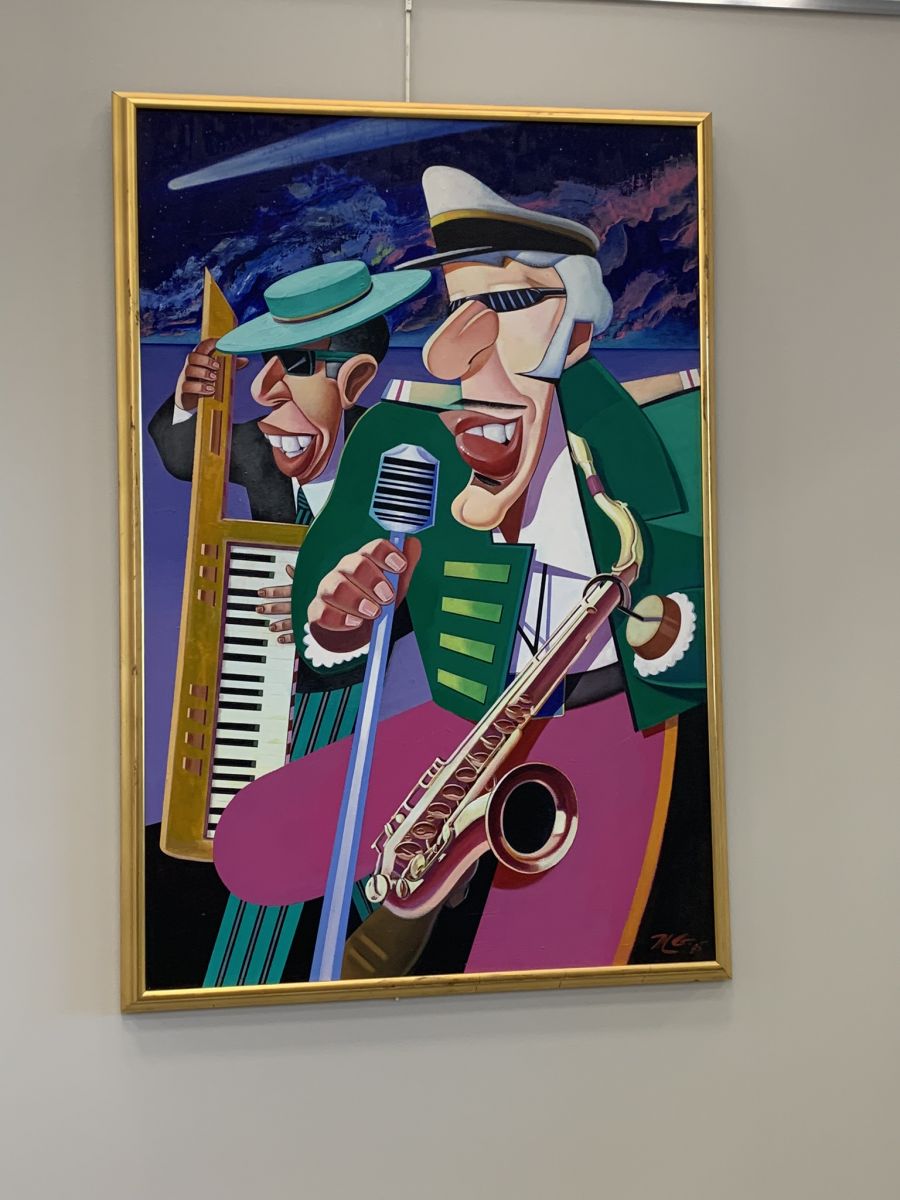 Mitch Gyson was born in Bucks County, Pennsylvania in 1959. As a child growing up in the suburbs of Washington, D.C., influences such as Mad Magazine, Duckpin Bowling, and Saturday cartoons set the stage early for an offbeat and curious view of the world. As a student at the Maryland Institute, College of Art, the power and vision of the Old Masters, J.M.W. Turner, and Maxfield Parrish, helped to instill a passion for pushing the boundaries of conception and execution. Along with his travels throughout the U.S., the writings of Edward Abby and E.H. Gombrich have also inspired the artist to approach his subjects and ideas without convention.

The artist has always resisted working from a singular point of view. He chooses instead to allow the emotional and visual characteristics of his subject to inform his methods. He has developed a fascination with materials, mixing unlikely combinations, and unorthodox methods, often into a single work. This has assisted Gyson in forging a distinctive and versatile approach to painting and image making. Gyson’s landscape and figurative paintings have been exhibited throughout the U.S., and his diverse interests have led to a variety of projects from magazine and poster illustration to miniature golf course and theatrical set design and fabrication.

Gyson has received numerous commissions to paint murals for some of the nations busiest airports from corporations such as United Airlines and Marriott Corporation, yet also feels a great challenge and satisfaction in creating works for private collectors. With sensitivity and insight, Gyson’s pet portraits capture the unique sensitivity and character of his subjects. These works, which are in collections throughout the country, have been featured on The Animal Planet cable network, and exhibited at the State House in Boston.

Gyson’s work is in many private and corporate collections including the Estate of Thomas P. “Tip” O’Neill and Amgen Corporation.

Mitch Gyson lives in New York City with his wife, a Canine behaviorist/trainer, and their three-legged dog Cassidy.

Mitch Gyson's contemporary paintings are highlighted by looseness and spontaneity.

When Mitch Gyson was an aspiring artist, illustrators such as Maxfield Parrish and Norman Rockwell influenced him, and he originally wanted to follow in their footsteps. However, after graduating from school and looking for work, he found. "I really didn't have the temperament to be confined to the time limitations or stylistic preferences of an art director, so I just started creating my own universe of imagined and observed things." In his contemporary artwork. Gyson likes to mix it up by finding new ways to innovate on his canvases.

He says."I'll often play with materials or I'll play with content in an effort to see what I can provoke. My paintings are rarely a singular event. Often times my 'starts get archived to be revisited at a later date." As Gyson works in the fast-drying medium of acrylic, looseness and spontaneity are two key elements in his paintings. "I place a high priority on improvisation and keeping an open mind as a piece develops. The interplay of color, pattern and texture play key roles in the overall design. The paint has a powerful vocabulary of its own, my role is to put it in motion, let it dry and then respond," he says. "I do not think about style. I do think about form." Often, his application of paint is a stream of consciousness, but his mind is engaged in what he calls "a good-natured battle with the causes and effects of any given color or technique used."

Some of the pieces are assembled from multiple pans. while others are cropped and added to different sections of his works. Gyson's artwork is often done in series, such as BioBots on Parade that includes his piece We'll Have 'em Singing from the Rafters. He says this particular work is at the heart of the series" and contains a "rhythmic structural design element in which vague organism-like shapes float throughout the composition. I use the levity of the title to offset our impending War of the Worlds anxiety with the advent of such things as security drones and robotic warfare." Others in the series include Proud Sprout, where he used a single-color textured background on which the "figuratively suggestive black-and-white plant-based form can exist in stark contrast." He further notes-This separately created form. which feels equal parts plant and Transformer, is a combination of poured and swirled paint along with leaf-like shapes that have been collaged."

In other paintings, Gyson works directly from life—particularly with pieces that are based on the figure such as Athena on Fire and Jackie Standing Gyson says. "Working from life has been an invaluable exercise in sharpening my eye to the essentials of good design and eye-hand coordination. For me, this is a very intuitive process in which the quick-drying results become a testing ground for each successive piece." With Jackie Standing t, the "long, lithe body lends itself to this wonderful standing pose,"

Gyson explains. He adds that "Finding the right shape and the right angle with a single stroke is a definite way to keep you focused on the essentials." Gyson also paints works based on nature in his The Nature of Things series, which includes paintings that evoke the seaside and vast landscapes. Breezing Up borrows its title from Winslow Homer and recalls -the power he conveyed with his depictions of rocky coastlines," says Gyson. He also used a combination of two sections of acrylic—one that reads like "color-filled clouds of cotton candy" and another that contains "hard edges and broad strokes."

With his landscape pieces, Gyson uses individual segments of paint of a distinct character to add visual interest and height tension, and to suggest distance and specific forms." •