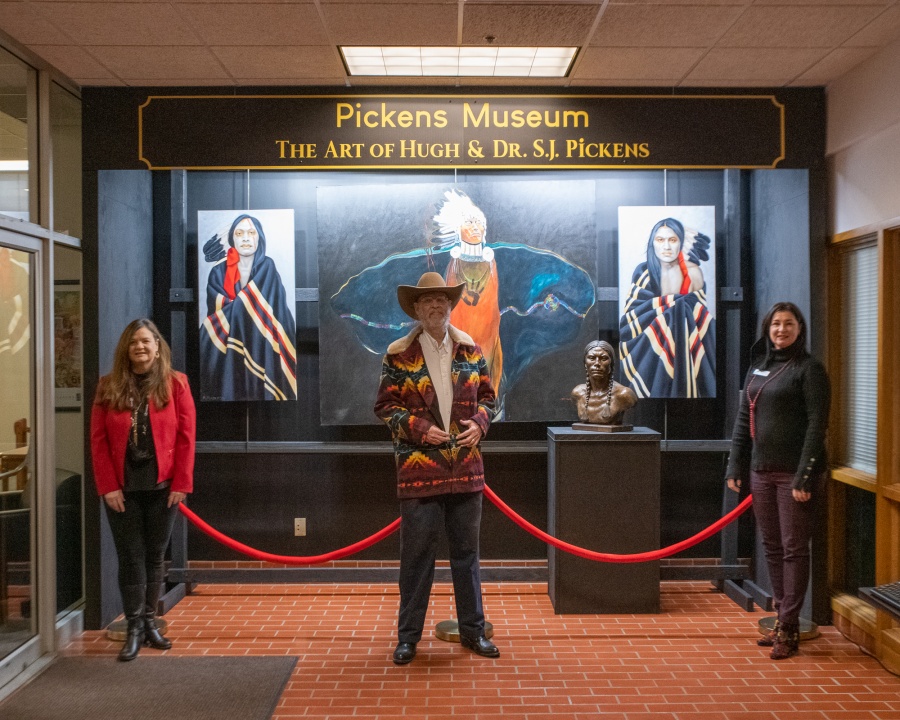 This past fall, Northern Oklahoma College entered into an initial two-year agreement for selected displays of art works with Doctor Pickens Museum, Inc. on the Tonkawa campus. This collection of art, primarily native art, will be on loan and will be installed over four phases.

The Pickens Museum, located in Ponca City, includes Native American Art, turquoise jewelry, art, Indian jewelry, painting and more. Hugh Pickens, Executive Director of the Pickens Museum, stated, “This is an exciting opportunity for us to share our art and culture with the Northern Oklahoma College community.” Pickens is presently in the process of planning the construction of an Art Museum in Northern Oklahoma.

Installation of Phase One of the project is now completed at the library entrance of the Vineyard Library Administration Building. The large center painting is entitled “Fool’s Crow” by artist C. J. Wells. Oil on canvas painting depicting Native American in traditional dress. Wells is a Santa Fe artist and poet of Native Amer­i­can and His­panic Amer­i­can descent. Her paint­ings often reflect her Span­ish and Amer­i­can Indian her­itage. Her por­traits of Amer­i­can Indian war­riors and children often depict her sub­jects with glow­ing “yel­low eyes” sig­ni­fy­ing tra­di­tional respect for the “holi­ness of the Earth and animals.” As TAOS Mag­a­zine states, “Well’s paint­ings present a fas­ci­nat­ing con­trast between the solemn faces of her sub­jects and the lush color and detail that sur­round them. Her images have an abstract, time­less qual­ity. The war­riors are set against dark back­grounds or cloudy skies, and their yel­low eyes seem to gaze out beyond the viewer. They appear to be lis­ten­ing to an inner voice or con­tem­plat­ing the past. Each one is an ele­gant, aris­to­cratic pres­ence sur­rounded by mys­tery and drama.”

The painting on the left is entitled “Brother of the Land” and the painting on the right is entitled “Brother of the Moon”, both by artist K. Henderson. Both oil on canvas paintings depicting Native American in traditional dress. Like much of Henderson’s art, her American Indian-inspired paintings reflect the influence of growing up in Oklahoma with part-Cherokee ancestry and a lifelong, intimate connection to material relics from earlier eras. Born and raised in Oklahoma, K. Henderson now calls rural New Mexico home. Both locations have provided her with inspiration for her contemporary western themed paintings. Her work has been in seven solo museum and gallery shows and numerous group exhibitions including Smithsonian National Museum of American Indian, Salon International, Western Spirit Art Show & Sale, Cowgirl Up! Show and Sale, C.M. Russell Museum Benefit Auction, Pastel Society of the Southwest, Pastel Society of America, Mt. Oyster Club, American Academy of Equine Art, Museum of the Cherokee, the Five Civilized Tribes Museum, The Bosque Conservatory, Oil Painters of America National and Regional, and National Oil and Acrylic Painters Society and so on. Also displayed is a bronze bust, entitle “Apache Warrior” by sculptor Malvina Hoffman. Though Hoffman was also a talented singer and sketch artist, she decided to become a sculptor after receiving praise from Gutzon Borglum, the sculptor of Mt. Rushmore, for a clay portrait she had created of her father. As a teenager, she studied sculpture with Borglum and at the Women’s School of Applied Design and the Art Students League. After five years of travel and work, Hoffman had created 104 sculptures—27 life-size, 27 busts, and 50 heads—for the Hall of Man.

“We are so happy to partner with Hugh Pickens and the Doctor Pickens Museum,” said NOC President Cheryl Evans. “This collection of art will add to the cultural enhancement of the Library and Cultural Engagement Center on the NOC Tonkawa campus. We are grateful for friends such as the Pickens who have chosen to share their gifts with us.” Phase two of the art work display is now underway at the entrance of the Cultural Engagement Center in the Library.

Northern Oklahoma College, the state’s first public community college, is a multi-campus, land-grant institution that provides high quality, accessible, and affordable educational opportunities and services which create life-changing experiences and develop students as effective learners and leaders within their communities in a connected, ever changing world.

NOC, a public two-year community college, serves nearly 5,000 students on the home campus in Tonkawa, branch in Enid, NOC/OSU Gateway Program in Stillwater, online, and the University Center in Ponca City. Of these students about 60% receive financial aid and/or scholarships. Over 80% of NOC students complete their degree with zero debt.

NOC is accredited by the Higher Learning Commission and offers associate degrees in three general areas: Arts, Science and Applied Science. The associate degree fulfills lower-division course work which is applicable towards a bachelor’s degree.