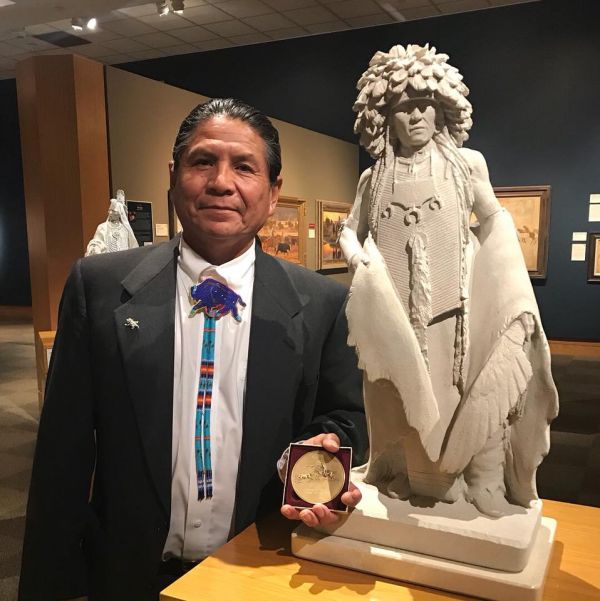 Oreland is world-renowned for his work in stone and bronze sculptures. His works can be found in private, corporate, and museum collections in the United States and abroad. Oreland was born in Shiprock, New Mexico on June 3, 1958. He is a native of New Mexico and is of Dine' (Navajo) and Ute decent. He has grown up in the four-corners area most of his life, both on the Navajo and Ute reservations. Currently, Kirtland, New Mexico provides home to his family and his studio.

As a child he knew, at an early age of four, that he wanted to be an artist. As a young man, he experienced various influences that have played major roles in his life and how these experiences have formed the man who commands admiration and respect in today's contemporary art world.

The influences he has had throughout his life include his family - his father, mother, grandfather, and teachers. These individuals provided encouragement, support, and inspiration to grow his artistic talents. He found that his father's work as a silversmith and painter, his mother's musical talent, and his grandfather's participation in traditional songs and dances provided him with cultural inspiration and appreciation for cultural history. These experiences provided Oreland with a rich and viable life way which in turn was the catalyst that spun ideas, images and creativity into a successful career.

Oreland's work in bronze is more recent but has proven to be just as popular as his works in stone. His works in stone are primarily in marble, alabaster, and limestone. In his travels to France and Italy in 1978 and 1984, respectively, turned out to be additional life changing experiences. While there, Oreland was able to capture, in heart and mind, European art and culture. Seeing and feeling the impressive artistic works of the Greek, Roman, Renaissance and Baroque periods provoked another dimension in Oreland's artistic life. In 1986, a trip to Japan, introduced a new concept as well as a wider perception/perspective of art in other cultures. The time he spends in studying the arts and art history in regards to the European masters (Bernini, Canova, and Michelangelo) are actually his "periods of inspiration". Transcending into a period with the Masters ultimately provides motivation and inspiration. A constant study of sculptures in Italy, France, Japan, England, and Egypt continues to enhance Oreland's work. Researching and working with ideas and depictions of Native American lifestyles, songs, and dances of the 1800-1920s has always been a favorite as well. Images from this time span continues to give Oreland a sense of home and the finality of his pieces reveal it.

In 1993, Oreland received the distinct honor of becoming the first Native American artist to be a member of the famed and prestigious organization "Cowboy Artist of America" CA. This honor continues to launch Oreland into new heights in his career. In 1996, he was chosen out of 50 artist and was commissioned by the Ponca City Native American Foundation to produce a twenty-two feet bronze sculpture of "Chief Standing Bear". It is Oreland's crowning achievement to date and his most public artistic statement.

Since being inducted into the CA, Joe has won numerous awards within the organization. In addition to receiving the New Mexico Governor's Award for Excellence in the Arts, he has been asked to participate in the prestigious Prix de West Show and has won the Prix de West Purchase Award at the National Cowboy Hall of Fame in Oklahoma City. Joe has been selected to be part of the Autry Museum's Masters of the American West show where he has been awarded the Gold Medal Sculpture as well as the Norris Foundation Award for Sculpture.

Oreland's love for art has placed him in an elite class of stone and bronze sculptors known throughout the world. In spite of all his accomplishments and ever-growing popularity, Oreland remains humble, sensitive, and grateful. He still finds time to teach others at his studio or workshops. He continues to be "down to earth" where the foundation that sustains him are still derived from family, good friends, Creator and creation. Whether he knows or not, he serves as a great role model for all young people whether they will choose a life as an artist or not.

Artist Statement: "I find strength, faith, and dignity through my heritage, yet I also find these same things in other cultures - and I derive inspiration and motivation from them as well. In my humble opinion, I'm just an artist who happens to be Native American. I find myself in a unique place of having the blessing of both worlds. And my goal and desire is to have more Native American artists to be in this place".