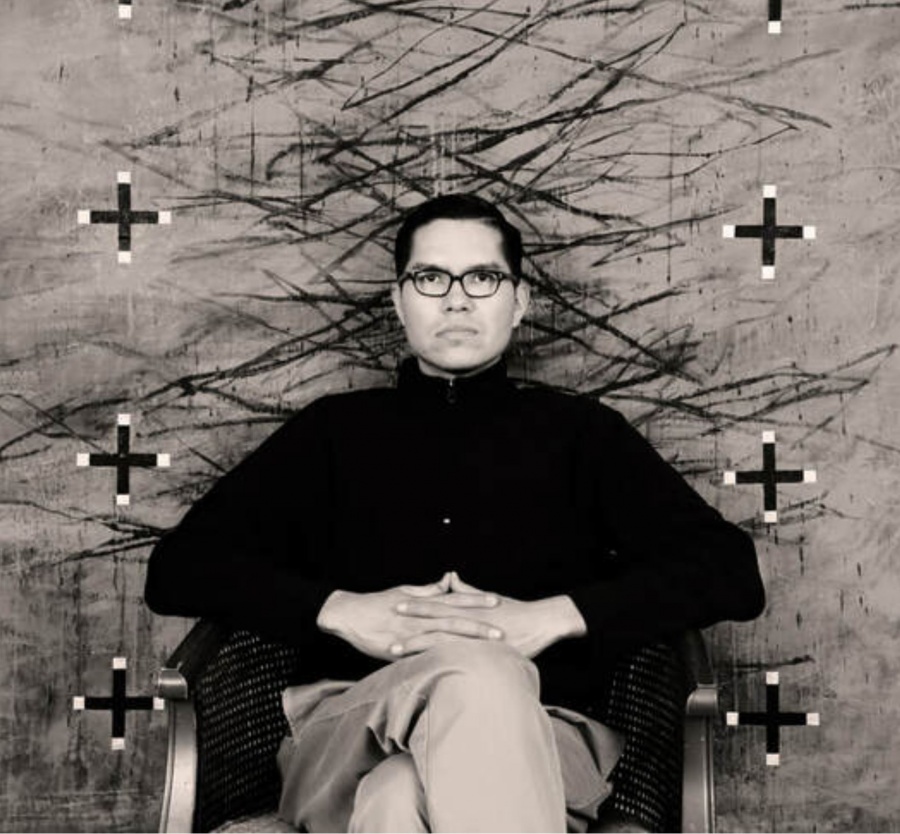 Patrick Dean Hubbell. Patrick Dean Hubbell is Dine' (Navajo). He is To'ahani'(Near to Water Clan), Born for Dibe'lizhini (Black Sheep), Maternal Grandfather is Kinyaa'aanii (Towering House People), Paternal Grandfather is Hona'ghaahnii (One Who Walks Around Clan). He is originally from Navajo, New Mexico, located near the Northeast region of the Arizona, New Mexico border of the Navajo Nation. Patrick attended Arizona State University where he received his Bachelors of Fine Art in Painting and Drawing and also minored in American Indian Studies. He is currently residing and working on the Navajo Nation in Window Rock, AZ.

Patrick Dean Hubbell is Dine' (Navajo). He is To'ahani'(Near to Water Clan), Born for Dibe'lizhini (Black Sheep), Maternal Grandfather is Kinyaa'aanii (Towering House People), Paternal Grandfather is Hona'ghaahnii (One Who Walks Around Clan). He is originally from Navajo, New Mexico, located near the Northeast region of the Arizona, New Mexico border of the Navajo Nation. Patrick attended Arizona State University where he received his Bachelors of Fine Art in Painting and Drawing and also minored in American Indian Studies. He is currently residing and working on the Navajo Nation in Window Rock, AZ.

My work is an investigation of identity. I am drawn to the subtle questioning of this examination. I find inspiration in everything and I use various themes rooted in the correlation and the conflict of both my Native American and Contemporary mindset. I am equally interested in the abstract qualities of expression as well as the human figure. Using nature, stories, philosophies, and abstract representations, I am able to depict this existence of identity. My work includes the use of bold and vibrant colors, combined with the integration of various elements of design, and a multitude of line quality and expressive mark making that often mimics what nature provides. These elements allow me to create my own aesthetic value in which reflect a personal experience of memory, physical, mental, and spiritual instances from life. The expressive personality of my work allows the viewer a momentary visual experience.

Within the span of my artistic expression I have worked in many different "styles" and genres of two dimensional visual art. Through these different ways of working i have developed several series, each with different and separate intents, but all connected through similar thought processes. Within my time of producing art I decided to title my series of works and continue producing work that allows me to thoroughly investigate and explore my ideas and reasoning behind my decisions within the work.

“Untitled Appropriation” is a series of work that is focused on creating work on top of mass produced, mass manufactured products that imitate or render the "Native American" theme and /or motif. The design patterns found on these products (including but not limited to: blankets, fabrics, tee shirts, published and printed materials) are familiar in many different textiles, baskets, and pottery used by many tribes, including Navajo. Manufacturers have adopted and/ or appropriated these design patterns and have been using them for countless years. These paintings are painted on top of the polyester fleece blankets that one would be able to find at a flea market on any reservation and reservation border town. There is an abundant supply of these curio type reproductions. These mounted blankets are combined with an abstract expressionistic style of painting. The inspiration for the painting process stems from a sense of graffiti, several forms of street art, and the multi layered, aged application of vandalism. This process of street art and the cycle of a surface being worked and removed and then only to have art reapplied is very intriguing. Combing this type of work with the natural cycle that at the artwork endures from the elements, it is intriguing to me to merge design and expressionistic mark making. I am inspired by the act and the idea of graffiti more so than in any one specific kind of work. By appropriating these different "Native American" design patterned goods into my artwork, I have control to alter and/or "vandalize" to my liking. The act of reclaiming these products is essential.

"Red and White" is a series of paintings that derives from quick, gestural drawings from my everyday surroundings. Through capturing my existence within that space, at that particular moment in time, the drawing becomes a concrete memory translated on paper. These drawings focus on line quality and movement of particular environments including landscape, line quality of man made structures, lines of shadow formations, and natural organic elements of nature. From these drawings the cropping process continues and selected areas of the drawings are recreated onto the canvas, giving a superimposed composition that is then painted. These paintings are a documentation of my relationship with a specific time and place of my own personal experience.

"Almost A Portrait" is a series of paintings that examines the idea of abstracting the figure through composition and focusing the portraits in a positive/ negative depiction. Through the use of contrasting shadows and highlights the portrait of the figure is almost lost in what merely seems to be shapes and values, but the figure is still present. The look and feel of old photographic process of those time is retained through a limited palette and washes and glazes. These paintings are centered around historical images of studio portraits of the American Indians and the Old West. Throughout the History of America, American Indians have been portrayed throughout history in many ways that have been not in the best interest of those peoples. These works are a way of allowing the viewer to thoroughly observe the paintings to realize the figure, but not on an individual basis but as a people. The Importance of the regalia and traditional clothing make their way through and are present for the reinstatement of significance to those specific peoples and nations in which they hold high traditional, cultural, and spiritual regard. Through this series I use reinterpreted historical portraits images which have also been used in many "Indian" paintings. I strive to create "The Next Great American Indian Portrait" but i will never succeed because these paintings are "Almost A Portrait".