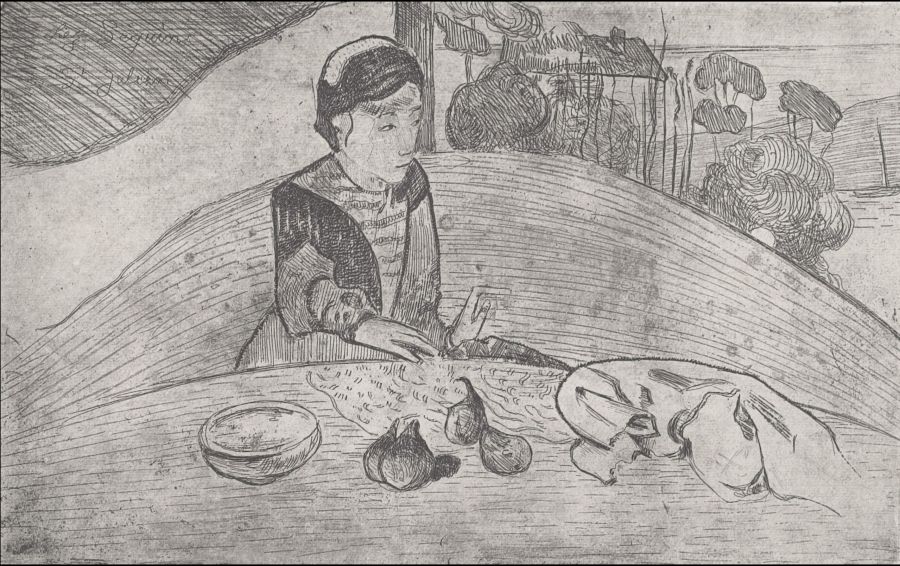 An original Paul Gauguin Etching at Pickens Museum.(1894) Original zinc plate etching printed in black ink on Ingres d’Arches laid paper. Inscribed “Chez Seguin à St. Julien” in the plae upper left. A dark and richly printed impression of Kornfeld’s third and final state. Printed after the addition of the cross to the lower right corner of the cloth on the table lower right, from an edition of unknown size issued circa 1963 (according to Kornfeld, Guérin does not record this edition), apart from the edition of 100 of the first state printed in dark green, published by Julius Meier Graefe for the album Germinal in 1894, and apart from the editionof 10 of the second state published by Jacqueline Delâtre circa 1950. 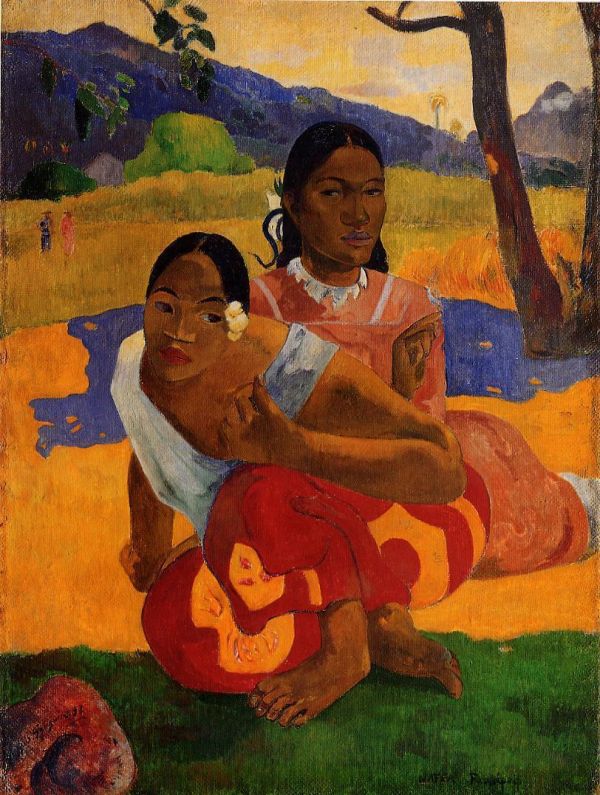 When are you Getting Married (1892) by Paul Gauguin.

French post-Impressionist artist Paul Gauguin was an important figure in the Symbolist art movement of the early 1900s. His use of bold colors, exaggerated body proportions and stark contrasts in his paintings set him apart from his contemporaries, helping to pave the way for the Primitivism art movement. Gauguin often sought exotic environments and spent time living and painting in Tahiti.

The dark side to Paul Gauguin's Polynesian fantasy

There was a dark side to Paul Gauguin's Polynesian fantasy, but his work is as seductive as ever.

How many men have dreamed of emulating Paul Gauguin? In the century since the French painter's death, the story of a stockbroker who abandoned the Bourse, his hectoring, spendthrift wife and five children for a Polynesian paradise has been sanitised of its more unpalatable elements.

All but forgotten are Gauguin's brawling, drinking, whoring, and penchant for bedding 13-year-olds, whom he impregnated and infected with syphilis while railing against the missionaries he accused of perverting the culture of Oceania.

Gauguin inherited a provocative streak from a revolutionary grandmother, and named his last abode - located between Protestant and Catholic missions in the Marquesas - the House of Orgasm. Seven months before his death at the age of 54, he wrote to a friend: "You've known for a long time what I wanted to establish: the right to dare everything."

Jacques Brel and Marlon Brando followed in Gauguin's footsteps. Like the French painter, they believed the description that Gauguin copied from a book in 1889: "Under a winterless sky, in a land of marvellous fecundity, the Tahitian has only to raise his hand to gather food; thus he never works . . . Tahitians . . . know only the sweetness of life. For them, life is singing and loving."

Gauguin's marriage to a masculine Danish woman, Mette Gad, was all but over by the mid 1880s when Mette took the children to Copenhagen. Though deeply attached to his daughter, Aline, Gauguin fled the contempt of his in-laws, wandering off to Martinique and Brittany to paint.

In the autumn of 1888, Gauguin finally gave in to Vincent Van Gogh's insistence that he join him in Arles. The unstable Van Gogh hero-worshipped Gauguin and dreamed of establishing a "Studio of the South" with him in the tropics.

Gauguin went to Arles only because he was bankrupt. Van Gogh's brother, the art dealer, Theo, offered a stipend if he would live in Vincent's house. But Gauguin's indifference towards Van Gogh transformed the Dutchman's adoration into fury.

Three days before Christmas, Van Gogh hurled an absinthe glass at Gauguin in a café. Gauguin suggested it would be better if he left. Fifteen years later, Gauguin recorded how he went for a walk in the public gardens: "I heard behind me a well-known step. Short, quick, irregular. I turned about the instant that Vincent rushed towards me, an open razor in his hand. My look at that moment must have had great power in it, for he stopped and, lowering his head, set off running towards home."

The following morning, Gauguin learned that Van Gogh had sliced off his left ear and delivered it to the local brothel with instructions that it be given to a shy young prostitute named Rachel. Gauguin left Arles immediately, telling a policeman: "If he asks for me, tell him I left for Paris; the sight of me might prove fatal to him."

In 1891, the French minister of fine arts agreed to grant Gauguin an official but unpaid mission to study the customs of Polynesia. His first Tahitian painting, Ia orana Maria (Hail Mary), shows a woman in a red pareo holding an infant on her shoulder. Were it not for the haloes and blue-and-yellow-winged angel in the background, the painting would be a scene from daily life.

The Paris Musée du Luxembourg rejected Gauguin's offer of Ia orana Maria in 1893. Today, the masterpiece is on loan from the New York Metropolitan Museum of Art, and hangs in the entrance of the Grand Palais exhibition. No matter how many times one has seen it, the colours are still astounding. As the poet Stéphane Mallarmé wrote: "It is extraordinary that one can put so much mystery in so much brightness."

In Tahiti in 1891, Gauguin took his first child "bride", a 13-year-old named Teha'amana, also called Tehura. She was his favourite model during his initial two-year stay. Penniless and ill, Gauguin returned to Paris two years later, where he lived with another 13-year-old, "Annah la Javanaise", from Malaysia.

Gauguin moved back to Tahiti in 1895, and "married" Pahura, aged 14. Their infant daughter died in 1897, the same year, ironically, that Gauguin's beloved Aline died in Denmark.

In 1901, Gauguin moved to the Marquesas in the belief that "life is very easy and cheap there". His last "wife" was 14-year-old Vaeoho Marie-Rose, who rejected him after bearing their daughter. Gauguin had persuaded her father, a local chieftain, to take the girl out of convent school so she could become his vahine.

Gauguin's paintings of a pregnant Teha'amana, wearing a Western "mission dress" and holding a mango, or seated against a backdrop representing her Polynesian ancestry, are among his finest.

In The Spirit of the Dead Keep Watch, Gauguin painted his child mistress lying naked on a bed, her eyes wide open, while a tupapau (ghost) looks on. The painting exudes primeval fear and sensuality. When it was shown in Sweden in 1898, the director of the Academy of Arts deemed the canvas indecent and had it removed from the exhibition. But Gauguin liked Spirit of the Dead so much that he used it as a backdrop to his own self-portrait. The painter's South American lineage can be seen in his features; his great-grandfather was the brother of the last Spanish viceroy of Peru, and Gauguin spent six years of his childhood in Lima. He boasted that he had Inca blood.

"It's reflected in everything I do," he wrote. "It's the basis of my personality. I try to confront rotten civilisation with something more natural, based on savagery."

In 1897, after suffering a heart attack, Gauguin began working on the huge canvas he considered his artistic testament.

"I wanted, before I died, to paint a big picture I had in mind, and I have worked feverishly night and day all month," he wrote. "It was all dashed off, directly with the top of a brush, on a piece of sacking full of knots and rough bits."

The result, Where Do We Come From? What Are We? Where Are We Going?, is a right-to-left visual narrative, in which a newborn infant progresses to old age. Gauguin often painted from prints and photographs, and is believed to have mimicked Botticelli for the composition and Rembrandt for the figure plucking a piece of fruit in the middle. The painting, which belongs to the Boston Museum of Fine Arts, had not been seen in France for 54 years and is the centrepiece of the Grand Palais exhibition.

Yet despite Gauguin's - and present-day art critics' - assertions that Where Do We Come From? was his best work, there is something disturbing about the dark, moody painting. Just as we prefer the myth of the liberated stockbroker attaining artistic fulfilment to the reality of the drunken, syphilitic paedophile, Gauguin's prettier paintings are more pleasing.

The most beautiful must be the Metropolitan's Two Tahitians, a gentle, sensual image of two bare-breasted young women offering fruit and flowers. This is the South Pacific of our fantasies, not the dying culture that Gauguin discovered when he arrived in Papeete.