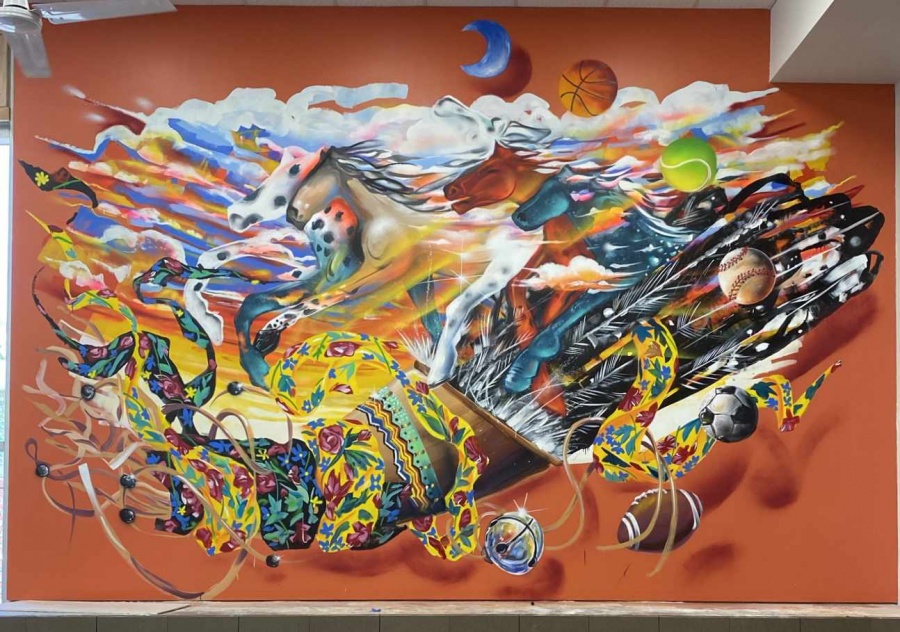 A mural by Yatika Starr Fields in the Northern Oklahoma College Cultural Engagement Center will be dedicated Wednesday, June 16 in the NOC Vineyard Library/Administration Building.

The mural was completed as a partnership with the Pickens Museum of Art and NOC.

Work began begin on the 20 x 50 feet mural May 3 and took two weeks to complete.

The mural is a result of a collaboration between Pickens Museum and NOC.

“When Cheryl Evans said they were looking for an artist to paint a mural for the engagement center, I immediately recommended Yatika,” says Hugh Pickens, Executive Director of Pickens Museum adding that Pickens Museum already has ten paintings by Fields in its permanent collection. “Yatika was delighted to have the opportunity to paint a mural that will inspire Native American students at NOC.”

“We are thrilled to partner with Hugh Pickens and the Doctor Pickens Museum,” said NOC president Cheryl Evans. “This mural will complete the fourth phase of the project and will enhance the Cultural Engagement Center. We are grateful for friends such as the Pickens who continue to support our College.”

Fields is a nationally known painter and muralist. While attending the Art Institute of Boston from 2000 to 2004, he became interested in Graffiti aesthetics, which has been integral to his knowledge and process along with Landscape painting- and continues to influence his large- scale projects and studio works. Fields is from Oklahoma and currently living and working in Tulsa in conjunction with the Tulsa Artist Fellowship. Fields has spent the last decade on the East Coast, New York City and most recently Seattle where the energy of urban life inspires and feeds the creative force in his artwork. He seeks to influence his viewers to rethink and reshape their relationships to the world around them.

The CEC opened in 2017 and includes contem­porary learning spaces where students, faculty, and/or tribal leaders can meet; individual study or collaborative projects can be conducted; cul­ture-based learning activities and community/cultural events can be provided; professional development can be held; and small group or individual tutoring can occur.

Northern Oklahoma College, the state’s first public community college, is a multi-campus, land-grant institution that provides high quality, accessible, and affordable educational opportunities and services which create life-changing experiences and develop students as effective learners and leaders within their communities in a connected, ever changing world.