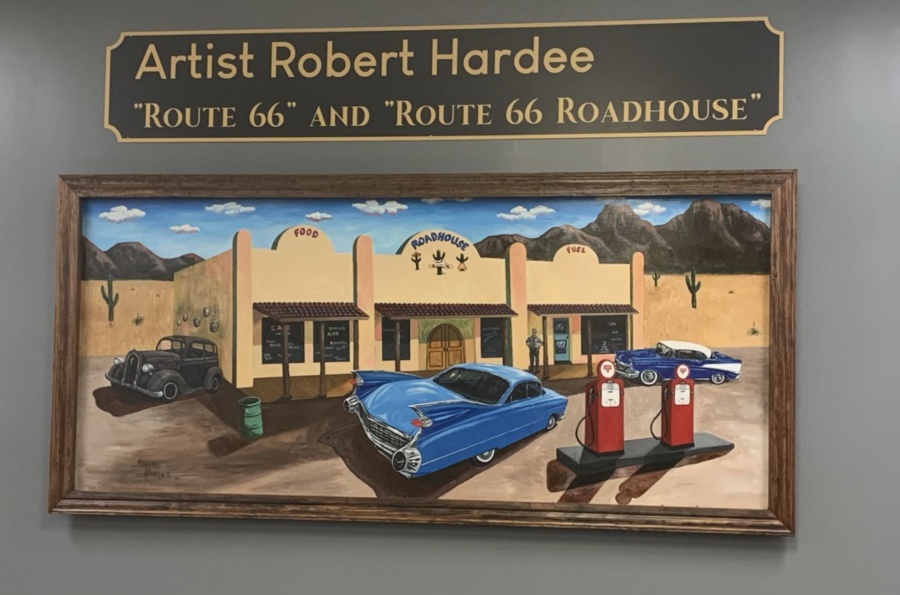 Pickens Museum Displays Route 66 Murals by Robert Hardee. Robert Hardee, who passed away in 2008 at age 55, is well known throughout the Ponca City area through the much exhibited prints of his "Ponca City Landmarks" painted from 1985 through 1993. 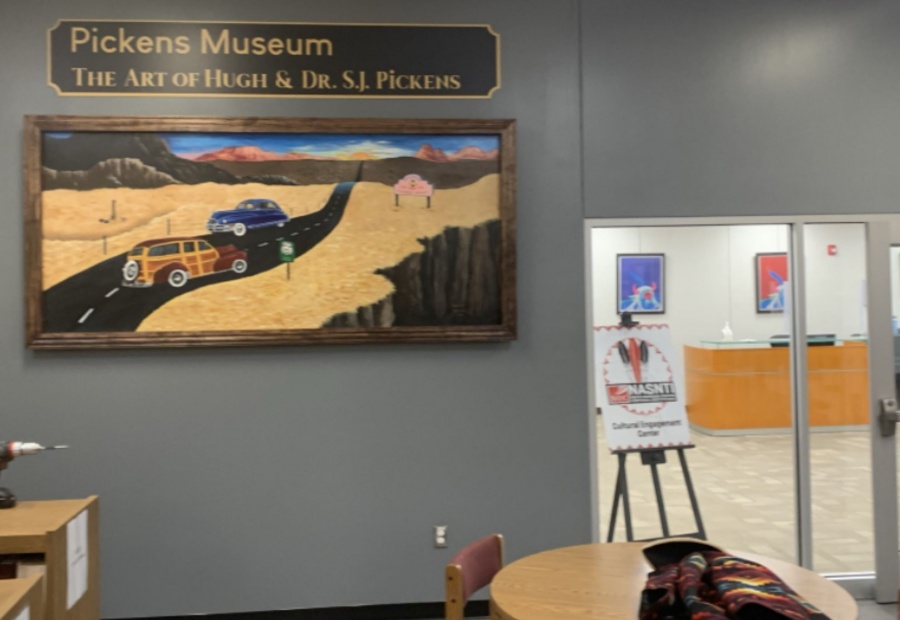 Pickens Museum Displays Route 66 Murals by Robert Hardee. Hardee's paintings are characterized by bright colors, which the artist obtains by using a technique which he says is "reminiscent of an early Flemish technique."

Robert Hardee is well known throughout the Ponca City area through the much exhibited prints of his "Ponca City Landmarks" painted from 1985 through 1993. The prints can be found hanging in many businesses and homes throughout the area. Hardee's historic landmark paintings include the Arcade Hotel, Downtown Ponca City featuring the Poncan Theatre, the old Rock Island Depot, the early day Ponca City Library; City Hall, which includes the statue of Marland, the Marland Mansion, and the Marland Grand Home. All prints are limited editions and most of the earlier prints are sold out but occasionally come up for sale on ebay over thirty years after they were created.

Now Pickens Museum is displaying two large murals by Hardee, who passed away in 2008 at age 55. The two murals called "Route 66" and "Route 66 Roadhouse “ are on display in the library for Northern Oklahoma College in Tonkawa." "These two murals were originally commissioned for a restaurant in Ponca City and on display in their dining room," says Hugh Pickens, Executive Director of Pickens Museum. "When the restaurant went out of business about 15 years ago, we had the opportunity to purchase the two murals."

Hardee's paintings are characterized by bright colors, which the artist obtains by using a technique which he says is "reminiscent of an early Flemish technique." First, an under painting is made using acrylics in shades of brown-gray and white. About two dozen layers of paint are applied to a sketch to obtain the necessary subtleties in shading. Then, three to four layers of translucent oil paint are glazed on top of the underpainting. Several months are required to accomplish the technique.

Hardee was an adopted member of the Ponca Nation. When not painting, teaching or riding a horse, Hardee could be be found at White Eagle visiting his Ponca relatives.

Hardee graduated from the School of the Art Institute of Chicago with a bachelor's degree in fine arts. He was a department supervisor at the University of Chicago Regenstein Library and taught an adult education course for the Field Museum of Natural History. Hardee taught art in Tulsa Public Schools beginning in 1995. He later became the visual art instructor at Booker T. Washington High School, where he taught the international baccalaureate art program. He also tutored in American Indian education programs and taught art classes for Indian children. He was an artist in residence for the Arts Council of Oklahoma for 10 years.

Hardee's philosophy was that knowledge gained becomes most worthwhile when it is shared with others, especially younger generations. This is one reason why teaching was so important to him. At the same time, it was equally important to Hardee to continue to live as a working artist. "This creative path has chosen me," wrote Hardee, "and the creative force which comes from within is a gift not to be taken for granted."