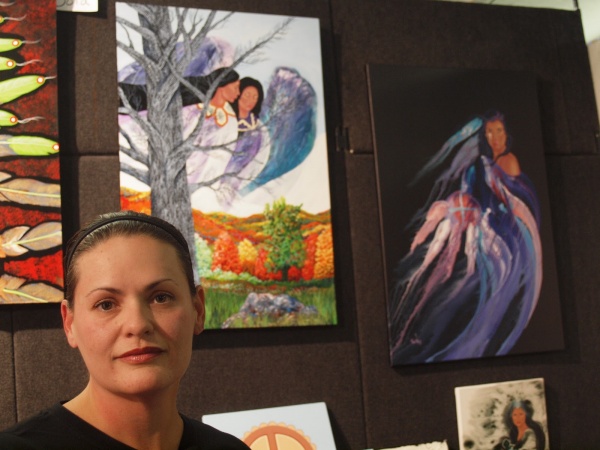 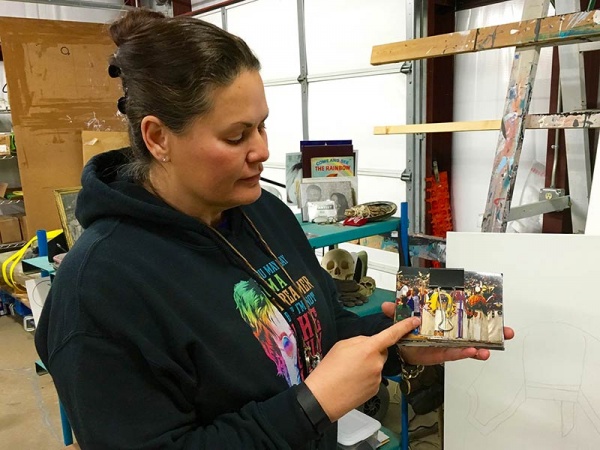 PRYOR, Okla. – Five years after her father Bill’s death, Cherokee Nation citizen Traci Rabbit is continuing her family’s artistic legacy with her ability to create and reproduce art for the studio they operated together – Rabbit Studios.

“(I’m) so just very blessed that I’m able to support quite a few people in my family…carrying on my dad’s legacy. Doing the only thing I knew to do,” Traci said.

Traci said her father was “progressive” when he started reproducing art to sell as a means of income to support a family. She said artists are realizing the value of reproductions and how to make a living as an artist.

For the Cherokee Phoenix’s second quarter giveaway, she donated an 18-inch-by-24-inch giclee (reproduction) on canvas of her “Gifts of Life” painting.

“I chose ‘Gifts of Life,’ which depicts a Native American woman with four hummingbirds representing the four directions, the four seasons, different stages of life. When people look at my work, I may try to convey one message but they see another. With spring coming, I thought that would be a good piece and people might like it,” Traci said. “The color palette that I used was to depict spring and the renewal of life and starting over. So that was what I was thinking when I painted that piece.”

Most of her art depicts Native American women. She said she is inspired by the women in her family.

“I would say that the reason that I do (paint Native American women) is from an early age my parents always empowered us kids. My mother is a very strong woman. The people in my family and the people that I was around and raised by, they were all very strong women. So, I guess growing up around that I admired their strength and their determination and their ability to rise above bad circumstances,” Traci said. At Rabbit Studios, all work and reproductions are done in-house on items such as art tiles, clipboards, mouse pads, cell phone covers, coffee mugs, coasters, scarves and handbags. Traci said her schedule throughout the year is “crazy.” From August to March, she travels to one or two art shows a month in and out of state, including wholesale shows. From March to July, she creates new art and decides what will come next in her product line to get ready for the next season’s schedule.

Not only does she have to think creatively for her art, but she also get into a business mindset to determine what products she wants to sell.

“Not only do I create the art, but being able to do the business side of it is, I think, so important for artists today. They should know both sides. That way they’re not fumbling through, not understanding. At least have an understanding of…that other side if you’re going to do it for a living because it is very important,” Traci said.

Traci Rabbit captures a spirit in the Native American woman

Traci Rabbit (Cherokee) captures a spirit in the Native American woman that embodies the best in female strength. Her paintings represent the way it feels to be female; to fly in the face of all that comes, with fierce dignity, energy and strength, but they also capture women’s ability to be gentle, kind and compassionate. Traci is the daughter of internationally known artist Bill Rabbit and Karen Rabbit. She was born at the Claremore Indian Hospital and grew up in the Pryor, OK area. “My family has always been close and I had a wonderful childhood. I grew up attending my dad’s art shows. I never considered becoming an artist because in my mind he was the greatest and I knew I couldn’t compare to him in that arena. However, I enjoyed doing art and began winning art awards in the 1st grade and the rest is history.”

Traci attended Northeastern State University, which originally was the Cherokee Female Seminary, receiving a BA in Business Administration, the first in her family to graduate from college.

“My father started selling my paintings to galleries when I was in high school and college. Upon graduation, I started attending art shows with him.” The art business consumed her and she has never looked back. Her degree has been invaluable to the business, which includes a full gift line. The Rabbit family produces the gift line from the conception of the original art all the way to the production and packaging, so everything is Native American made. Her family takes great pride in this work.

After the passing of Traci’s father Bill Rabbit in 2012, she continues to live in the same area as her family since the removal of the Cherokee people to Oklahoma. “Without God and the support of my family, none of this would be possible,” she said.