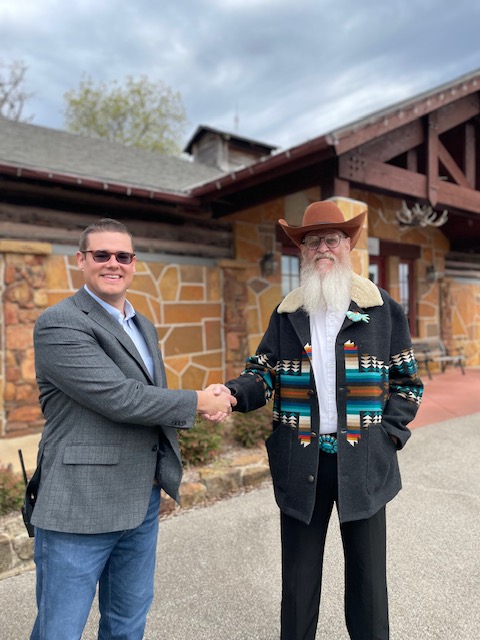 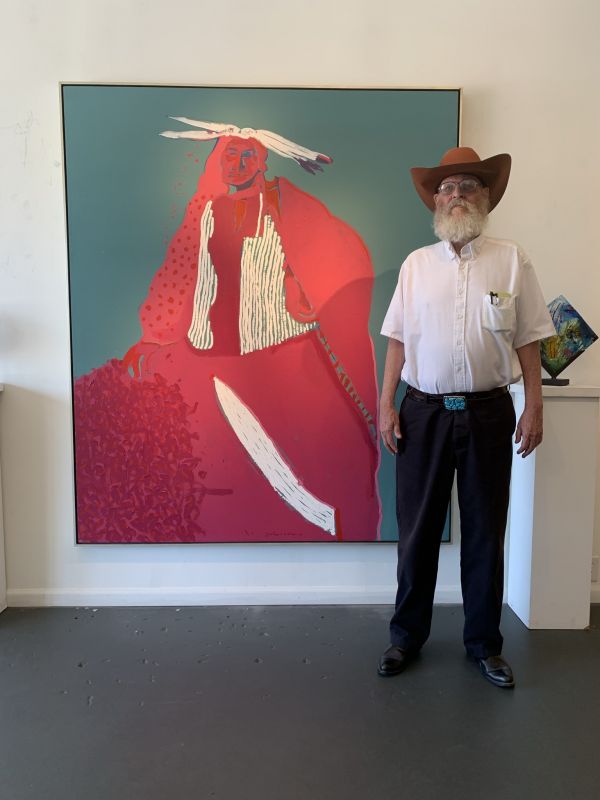 "Red Man" by Native American Artist Fritz Scholder will be one of the pieces loaned from Pickens Museum to be displayed in the Pickens Art Gallery at Woolaroc. Pickens Museum Director Hugh Pickens on right.

[BARTLESVILLE, OK, August 22, 2022] Woolaroc Museum is excited to announce the exhibition of the late Dr. S. J. Pickens, and Hugh Pickens collection of art. The Pickens Art Gallery is set to be on display in the Bunkhouse late January of 2023 and will feature select pieces of fine art from the Pickens collection, including works by Native American artists Yatika Starr Fields, Allan Houser, and Fritz Scholder.

When asked about his love of art, Hugh stated “I remember visiting the home of our church's youth director, Rev. Charles Clapp in 1967 when I was 17 years old and seeing original art on the walls of his apartment. I had always thought that art was only in museums and this opened my eyes to the world. I vowed that someday I would have original art in my home.”

Hugh made his first art acquisition when serving in the Peace Corps from 1970 -73 while living in the Andes in Huancayo, Peru. It was there that he made the acquaintance of Peruvian Artist Josue Sanchez and bought his first paintings by him. “My wife and I independently became art collectors prior to our marriage and this was something we had in common that brought us together. Prior to our marriage, my wife primarily collected African art and African-American art including paintings, bronzes, and verdite sculptures. When my wife and I married in 1984 we combined our two collections and began purchasing art together,” stated Hugh. The couple added to their vast collection throughout their marriage, and Hugh has continued to collect after her passing in 2017.

“I am thrilled for Woolaroc to be able to partner with Hugh and showcase his collection here at Woolaroc,” stated Woolaroc Museum Director, Shiloh Thurman. “This partnership allows our visitors an opportunity to experience new and fresh artwork that is outside of our permeant collection on a rotational basis.” Woolaroc CEO, Kevin Hoch added, “Hugh has amassed an incredible collection of paintings, sculptures, and jewelry over the past five decades. We are proud to partner with him to diversify our guest experience and share his lifelong passion of the arts with our many supporters.”

Woolaroc is open year-round and is a 3,700-acre wildlife preserve, museum, historical attraction, and much more. For more information visit www.woolaroc.org or visit their Facebook and Instagram page. Woolaroc is listed on the National Register of Historic Places and is located 12 miles SW of Bartlesville, OK, on State Highway 123.