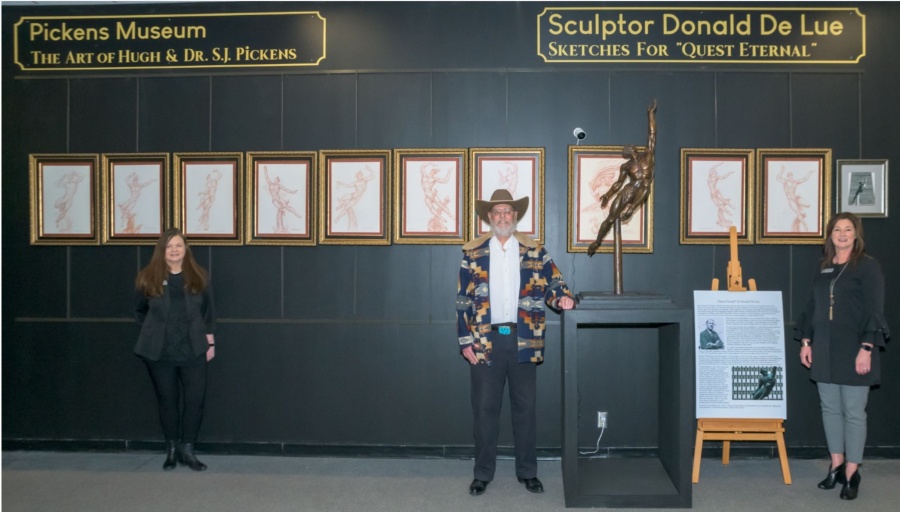 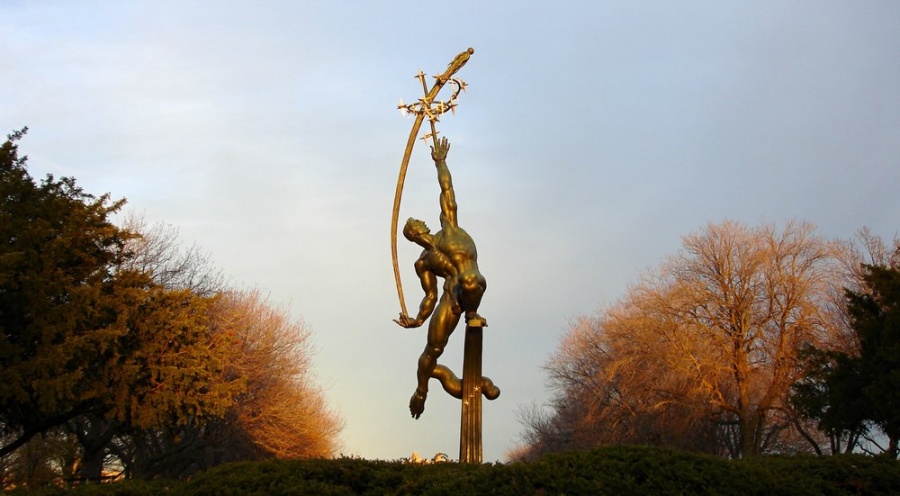 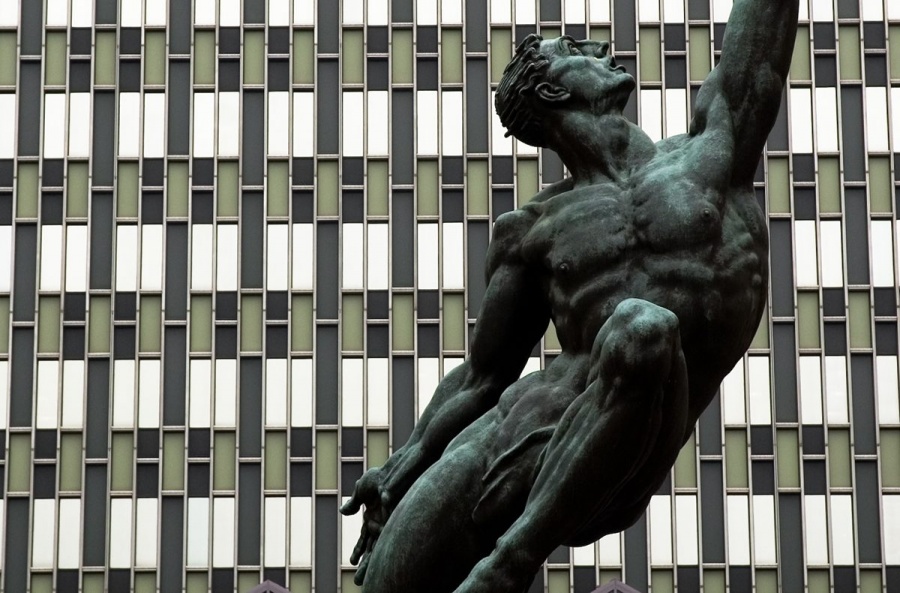 Quest Eternal by Sculptor Donald De Lue. Quest Eternal” is one of De Lue's best known works. Twisted in a dramatic pose, this 27-foot tall male figure reaches toward the sky. The muscular nude brings to mind ancient Greek and Roman sculpture, as well as the work of Renaissance-era artists, who often looked to classical art to inspire their choice of subject matter and style. Here, the sculpture also fits in with the modern urban landscape and parallels the bold verticality of the neighboring Prudential Tower, completed three years before the sculpture's installation. Despite the work's enormous size and weight of five tons, it was cast in one piece at a foundry in Italy. In contrast, many large sculptures are cast in multiple parts and then welded together. 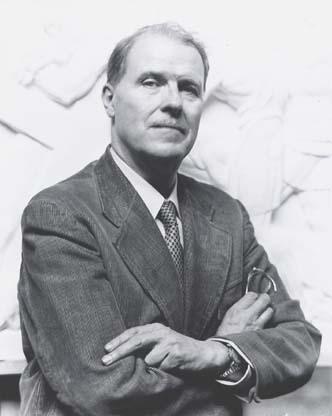 Sculptor Donald De Lue. In a career that spanned half a century, Donald De Lue created hundreds of statutes, medals and medallions, many of them patriotic, many ofQuest Eternal.jpg them epitomizing the virtues of strength, patriotism, energy, and the American spirit. In an interview he gave in his Leonardo studio in 1975, DeLue said his mission was to “give dignity to the man, not make a hero of DeLue.”

Ask any Ponca City resident the name of the sculptor who created the Pioneer Woman statue and he or she will probably answer Bryant Baker says Hugh Pickens, Executive Director of Pickens Museum. “However Bryant Baker did not create the Pioneer Woman single-handedly. Actually Baker led a team of sculptors who worked on the iconic sculpture that has long been a symbol of our Oklahoma heritage” says Pickens. “And foremost on Baker's team was Donald De Lue, who worked as Bryant Baker's chief assistant from 1923 to 1938 and played a key role in the creation of the Pioneer Woman.”

Now Oklahomans can see work by Donald De Lue for themselves in an exhibition that Pickens Museum has opened at Northern Oklahoma College in the administration building in Tonkawa. Visitors to the Pickens Museum exhibit at NOC can see the maquette for “Quest Eternal” plus ten sketches that De Lue produced with the same theme.

Born Donald H. Quigley in Boston, the artist took the name De Lue in 1918 from the maternal side of his family. At an early age De Lue studied with Bela Pratt at the Museum of Fine Arts in Boston, but most of his training came from working in the studios of older sculptors. De Lue spent three years with Richard Recchia, and another three with the Englishman Robert P. Baker, brother of Bryant Baker with whom De Lue would later be employed for fifteen years. After World War I De Lue worked on a tramp steamer to get to Europe and spent five years in France where he worked for several sculptors, including Alfredo Pena.

Returning to the United States, De Lue worked from 1923 to 1938 as chief assistant to Bryant Baker in New York City. While working for Baker, De Lue had a key role in the creation of the “Pioneer Woman” statue.“Bryant Baker primarily created busts during his career and he was very skilled in throwing a likeness of a client or of a prominent public figure,” says Pickens. “But Baker's strengths did not include musculature and doing full bodies.

According to art historian Donald Roger Howlett, when De Lue went to work as Baker's chief assistant in 1923, he was the perfect addition to the Baker studio. “De Lue's greatest talents lay in the areas where Bryant Baker was weakest,” writes Howlett. “Baker was a highly competent sculptor who had the ability to capture a portrait likeness quickly. His severest critics admitted that while the sculptures might not be artistic, they did look like the subject. Baker had, however, great difficulty modeling the rest of the anatomy. De Lue's greatest strength was anatomy. Whether working from model, memory, or imagination, his muscles would always connect in the right place to the bone.”

As far as the Pioneer Woman was concerned, Baker said that he developed the conception and movement of the monument in an eight- or ten-inch sketch model he made a few hours after he learned about the competition." De Lue then executed the thirty-three-inch competition model for the sculpture in 1927, with Baker supervising and completing the face.

After the commission for the seventeen-foot sculpture on a thirteen-foot stone base was awarded to Baker by E.W. Marland, De Lue set to work in 1928 and 1929 modeling it in Baker's Brooklyn studio, working with Jean La Seure, the enlarger. De Lue later remembered: "One day Bryant decided he would work on it, and did some work. I said, 'Look, Bryant, if I were you I'd get the hell out of here, because you're not helping at all.' He said, 'Thank you very much!' and he went."

“Interesting enough, after Donald De Lue went out on his own in 1938, his career was much more distinguished than Baker's. De Lue went on to become one of the premier American sculptors of the twentieth century,” says Pickens. “Now Oklahomans can see work by Donald De Lue for themselves at our exhibition at NOC.”

De Lue's first solo work won recognition in 1938 when he was runner-up in a competition for the Federal Trade Commission Building in Washington, D.C. This led to several government commissions, the first of which were reliefs for the Philadelphia courthouse, completed in 1940. In the next almost fifty years, De Lue executed more monumental commissions than anyone else of his generation. Among his works are Spirit of American Youth Rising from the Waves for the Omaha Beach Memorial in France and Rocket Thrower for the 1964 World’s Fair in Flushing Meadows, New York. De Lue was President of the National Sculpture Society for many years.

In a career that spanned fifty years, De Lue created hundreds of statutes, medals and medallions, many of them patriotic epitomizing the virtues of strength, patriotism, energy, and the American spirit. In an interview he gave in his New Jersey studio in 1975, De Lue said his mission was to “give dignity to the man, not make a hero of De Lue.”

“Quest Eternal” is one of De Lue's best known works. Twisted in a dramatic pose, this 27-foot tall male figure reaches toward the sky. The muscular nude brings to mind ancient Greek and Roman sculpture, as well as the work of Renaissance-era artists, who often looked to classical art to inspire their choice of subject matter and style. Originally installed in front of the Prudential Tower in downtown Boston, the sculpture also fits in with the modern urban landscape and parallels the bold verticality of the neighboring Prudential Tower, completed three years before the sculpture's installation. Despite the work's enormous size and weight of five tons, it was cast in one piece at a foundry in Italy. In contrast, many large sculptures are cast in multiple parts and then welded together.

Another well known sculpture by De Lue was the centerpiece of the New York World Fair in 1964. Rocket Thrower is one of the largest, if not the largest, of all of De Lue’s works. Commissioned by Robert Moses for the World’s Fair, Rocket Thrower is 45 feet high and was one of the earliest concepts of man’s relationship to space and an adventurous spirit. De Lue was given six months to create his masterpiece completing it in time to be shipped to Italy for casting. He was allocated $105,000 for the statue, which still stands on the grounds of the Worlds’ Fair in Flushing Park in NYC. De Lue envisioned his works lasting thousands of years.

“Pickens Museum probably has the most complete collection of work by Donald De Lue in the world,” says Pickens. “I became interested in De Lue about 30 years ago when I learned of his role in creation of the Pioneer Woman. Our Museum now holds over forty of De Lue's sculptures, over 100 of his original sketches, and 135 of De Lue's original sketch books, that we have acquired over the years.”

“We look forward in coming years to making more of De Lue's work available to the public so they can see for themselves the magnificent creations by a world-renowned artist who has a strong connection to Oklahoma through the Pioneer Woman statue.”